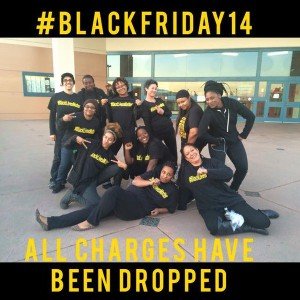 Oakland, Calif. – On the so-called “Black Friday” shopping day of Nov. 27, 2014, following the failure to charge cops in the killing of Mike Brown in Ferguson, Mo., 14 Black activists chained themselves together on a Bay Area Rapid Transit platform. They wanted to stop trains from moving at the West Oakland station in response to the police war against Black communities. The 14, a majority of them women, faced criminal charges.

Now, after a year-long campaign by the “BF14” and a broad coalition of allies, District Attorney Nancy O’Malley dropped all the charges on Dec. 4.

“Our criminal case is over, but the war on Black lives remains,” read a statement issued by Black Lives Matter Bay Area. “There can be no business as usual while young Black men and women … are murdered with impunity by police officers, security guards and vigilantes. The police remain an occupying force in our communities. Black bodies are not only over-policed and over-incarcerated, we are also underpaid, overworked, and priced out of communities we’ve lived in our entire lives.”

Organized labor took several key actions in advance of the DA’s decision. In May the Alameda (Calif.) Labor Council canceled a plan to honor Nancy O’Malley at its annual dinner, citing her handling of the BF14 case. A BART  union member showed up at a BART hearing to support the BF14.

Then on Nov. 10, as part of a national Fight for $15 action and in solidarity with Black Lives Matter, 14 labor leaders held a sit-in at the DA’s office, demanding she drop the charges against the BF14.

The labor leaders, including the president of the California Labor Federation and key officers of nine unions, representing service workers, university employees, teachers and hotel workers, issued the following statement:

“Half of Black workers make under $15 an hour, and our members are people of color who face a crisis of inequality and displacement as well as police violence and injustice from the courts. We know that economic justice and racial justice are inseparable. And we honor the actions of the Black Friday 14 as part of a long tradition of fighting for dignity in the civil rights and labor movements. …

“While the charges are dropped, the movement continues,” the statement went on, “and continued injustices — from Chicago, to Minneapolis, to the latest police killing in San Francisco — will keep calling us to action. As leaders of the labor movement, we reaffirm our commitment to our workers, to Black workers, to Black people and to standing for the freedom side.”