On Dec. 3, protesters rocked the normally mundane New York City Penn Station rush hour to commemorate the International Day for Persons with Disabilities and to protest the murder of Jeremy McDole, a 28-year-old African-American paraplegic who was shot and killed by police in Wilmington, Del., on Sept. 23 while in his wheelchair. 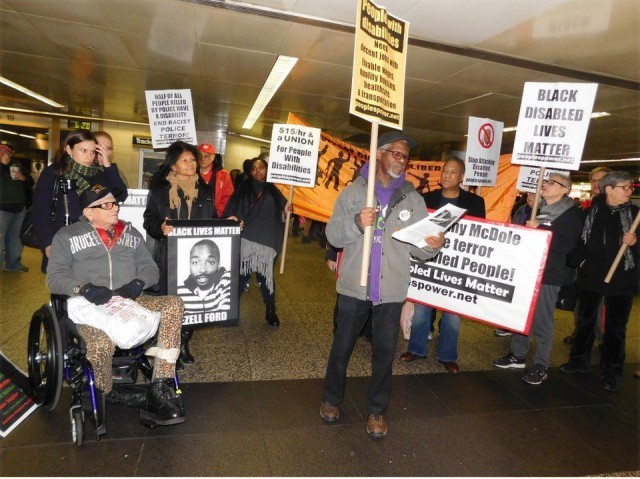 This protest was called by the People’s Power Assemblies, an organization in support of the Black Lives Matter movement to combat the rising national epidemic of police murders, particularly of youth of color.

Rene Imperato, a transgender Vietnam veteran with disabilities who also suffers from post-traumatic stress disorder, speaking in her wheelchair, pointed out Penn Station’s disgraceful access deficiencies. These include inadequate signage directing people with disabilities to accessible elevators, which violates the Americans with Disabilities Act; unacceptably huge distances for wheelchair users to get to accessible elevators; and an extremely narrow ramp to New Jersey Transit. Imperato said she was once almost pushed into a pillar there by a speeding able-bodied commuter.

Johnnie Stevens, of Parents to Improve School Transportation, urged everyone to show solidarity with the mostly Black and Brown women workers at Access-A-Ride, the Metropolitan Transportation Authority’s transit service in New York City for people with disabilities. The workers are demanding $15 an hour and a union as well as an end to a hostile work environment.

Kim Ortiz, from NYC Shut It Down, showed profound solidarity with the community when she apologized for a previous protest where demonstrators were impatient and left people with disabilities behind. Trans disabled activist Josephine Perez discussed the special oppression of trans people with disabilities. Larry Holmes, of the PPA, told the crowd how workers with disabilities are discriminated against and denied the same minimum wage rights as other workers, sometimes earning as little as $2 a day. As many as half of the people killed by police had a disability.

Sharon Eolis, of Workers World Party, talked about her experiences as an emergency room nurse trying to care for people with disabilities for whom medical care is woefully underfunded.