The following is the full text of WW editor Deirdre Griswold’s talk to the Nov. 7-8, 2015, Workers World Party National Conference.

WWP believes firmly in the inevitability of socialist revolution in this country. For two main reasons. 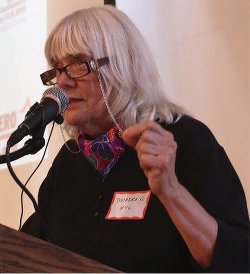 One is the level of development here. Workers are able to produce in tremendous abundance everything the people need to enjoy a secure, comfortable life.

But look what’s happening. Real wages continue to decline while real unemployment keeps rising. The gulf between rich and poor grows wider. Production is stagnant. And oppressed people are increasingly the scapegoats and targets of violence.

What a lesson in the horrible contradictions of capitalism! Everyone could have an infinitely better life. But capitalist ownership and control make that impossible. To liberate the wealth of society, we have to build a strong revolutionary movement.

Can it be done?

Well, at one time in this country millions of people were considered nothing but property, like a chair or a wagon. And the slave owners said, “You can’t take my property away! Why, I paid good money for this man (or woman, or even child). I have the ownership papers right here!”

But the enslaved people and the Abolitionists said to the slave owners and slave traders, “Owning human beings is wrong. Tearing children away from their parents and selling them is wrong. We’ll fight you and your system.” And they did fight, by the millions. We all know that the Civil War didn’t end racism in the U.S., but it ended the system of chattel slavery.

We’re saying, “Owning the labor of human beings is wrong. Trading in the wealth created by workers is wrong. It’s nothing but wage slavery. The stock markets, the private corporations and banks, the billionaires, they rule over this society — and all that is wrong! We’ll fight you to end it and build a socialist society where the wealth created by the people BELONGS to the people.”

Secondly, this is not a new idea. There have been many socialist revolutions in the last century. We salute them ALL. Their achievements have proven that socialism is an infinitely superior system — even when those revolutions have happened in very underdeveloped countries that have been attacked on all sides.

Today is the anniversary of the Russian Revolution — Nov. 7, 1917. It opened a new period in human history. For the first time, the working class seized power and began trying to reorganize the economy on a socialist basis.

Like all the revolutions that followed, it conquered through a heroic struggle by the exploited and oppressed classes. But the Russian Revolution also suffered the consequences of being first. Other revolutions attempted in Europe at that time failed. That left the Russian revolutionaries alone and at a terrible disadvantage, because Russia was so underdeveloped. It immediately became the target of a class war waged by the most advanced capitalist countries of that time.

If you’ve never read anything by Lenin, you should try. All his writings and speeches are on the Web. He never tried to cover up the shortcomings of the revolution. On the contrary, he told it like it is. He made very practical suggestions on what the revolutionary party should do, faced with a severe shortage of people with skills to run a state and an economy.

Lenin called for cutting down the state bureaucracy to just what was necessary, so positions in the Party and the state would not become filled with privilege seekers. It was hard. The poor people had a burning desire to overturn all the injustices of the past, but most were illiterate. They had to learn how to administer the country, how to modernize its industry and agriculture. The better educated already had the skills, but not the same revolutionary energy. Some put their own careers ahead of the revolution.

There’s a little pamphlet called “Better Fewer, But Better,” written in 1923, shortly before he died, in which Lenin urged his Party not to rush into grandiose projects but to work carefully and thoroughly to construct a state that empowered the workers and poor peasants. He said about  the European capitalists: “They failed to overthrow the new system created by the revolution, but they did prevent it from at once taking the step forward that would have justified the forecasts of the socialists … to develop the productive forces with enormous speed.…”

Looking back, given its immense problems, it is quite amazing that the Soviet Union achieved as much as it did in its 73 years of existence. The bureaucracy grew and imperialist threats of nuclear war wore down the leaders. But despite that, the USSR, with its planned economy, achieved enormous industrial and scientific development. What had been an agrarian country of illiteracy and hunger was the first to put up a space satellite. And while trying to raise the standard of living at home, it also gave a great deal of aid to liberation movements around the world.

That was the socialist side of the USSR, the side that forged ahead during the 1930s, when the capitalist world was in the Great Depression; the side that enabled the people to survive and then beat back a head-on attack by millions of troops from imperialist Nazi Germany. It was the USSR that turned the tide in Europe, and it was Soviet troops that raised the Red Flag over the Reichstag in Berlin.

Each revolution after that gained from not being alone. In this hemisphere, the 1959 Cuban Revolution inspired tremendous hope after the horrible years of anti-communism and right-wing dictatorships. In 1961 Fidel Castro declared that Cuba had made “a socialist revolution under the very noses of the Yankee imperialists,” and Cubans rejoiced. It was the first time he called the revolution socialist.

I was in the office of the 26th of July Movement in this city when Fidel’s speech came over the radio. The place erupted in joy, berets were thrown in the air, people were jumping and hugging each other. It meant that the revolution would not go back, would not be intimidated — and Fidel made this speech during the Bay of Pigs invasion, when Cuba was being attacked by CIA-backed mercenaries!!

But Cuba was not alone. The Soviet Union provided Cuba with oil when U.S. companies refused to refine it. It came to Cuba’s defense after the Bay of Pigs, even risking a nuclear confrontation with the U.S. in 1962. Cuba has never given in, even after the breakup of the USSR, when the Cuban economy, wounded by the U.S. blockade, almost imploded. Cuba survived, and today the U.S. government has finally had to admit that the revolution is here to stay and opened state to state relations.

We did a lot to support the Cuban Revolution. I want to mention a particular event that couldn’t have happened without the Party. It was a large rally in New York called “Let Cuba Live!” in January 1992. Washington thought Cuba couldn’t survive without the Soviet Union and increased its blockade and threats. Cuba had many, many admirers in the U.S., but none were able to carry out a major solidarity event at that crucial time. So our Party comrades stepped up and said “We’ll organize a rally for Cuba at the Jacob Javits Convention Center.” The hall held thousands of people. Ramsey Clark as well as Harry Belafonte, Alice Walker, Ossie Davis and other well-known artists were on the program. We also organized security against right-wing Cubans who tried to disrupt inside and also demonstrated outside. Hundreds of Cuba supporters, some who had come from across the country, couldn’t fit in the jam-packed hall. But they countered the right-wing with their own picket line outside the building all afternoon on that frigid January day. It was one of those moments when having a strong, determined party of revolutionary workers made all the difference.

I can’t do justice in the time I have here to the great revolutions in Asia that have put building socialism on the agenda for one-fifth of the world’s population.

The Chinese Revolution, which went on for more than two decades before victory, was an earth-shaking development. China, like the Soviet Union, then had to overcome extreme poverty and underdevelopment before most of its people could enjoy the material benefits of the revolution.

The heroic socialist revolutions in both Korea and Vietnam were attacked by U.S. imperialism with such ferocity that the scars linger even today. We can’t count the hundreds of times that our party and its youth group confronted the U.S. capitalist establishment demanding no war and aggression against Vietnam and the Democratic People’s Republic of Korea. In 1962 we organized the very first picket in the U.S. against the Vietnam War, and Ho Chi Minh personally thanked us for that. Comrades went to jail for resisting the draft, holding militant demonstrations, and supporting antiwar GIs.

The imperialist politicians made up all kinds of excuses for these wars, but in reality they feared and hated socialism so much they would rather kill half the people than let them build a society free of bankers and bosses.

We all know that China’s progress since the revolution has been very complex, especially since the Communist Party decided to allow private capital there. Nevertheless, some things stand out crystal clear. China has lifted 500 million people out of poverty in the last three decades. Wages have tripled in just the last 10 years. All of this was planned well in advance. Planning on this scale is impossible under capitalism, where competition and the profit motive dictate wages.

It is because socialism still has strong roots in China that U.S. imperialism grows more hostile every day.

Unlike many other parties, WWP did not wash its hands of China when the leadership turned to the capitalist market for investment. Our Party founder, Sam Marcy, made a very careful analysis of this turn, concluding that it was not a breakup of the workers’ state of the type that happened in the Soviet Union under Yeltsin.

We cannot be complacent about the dangers to any of the countries trying to build socialism as long as imperialism exists. But our role is not to abandon them if the policies of the leaders change. Most of all, we must build the revolutionary struggle here, which will help the whole planet get rid of the scourge of capitalism.