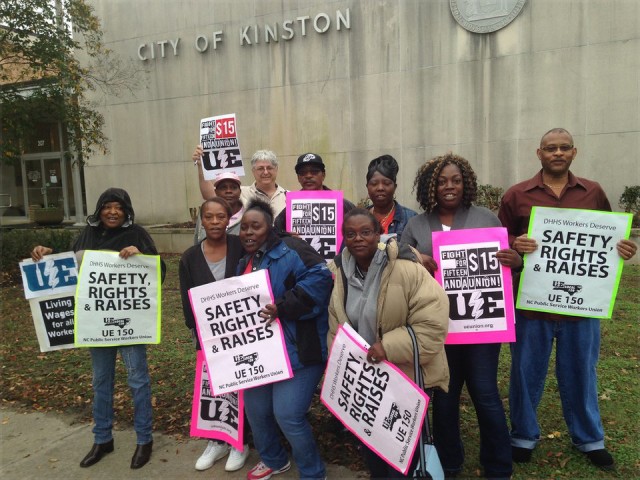 Kinston, N.C. — Members of the Electrical Workers Local 150, North Carolina Public Service Workers Union, who work at Caswell Developmental Center, held a rally at Kinston City Hall, joining with over 500 other such actions held nationwide on Nov. 10. The action called for wages of at least $15 per hour, union rights and the recognition that “Black Workers’ Lives Matter.”

Department of Health and Human Services workers and other state and city workers support striking fast food, child care and other low-wage workers and are organizing for the same issues at their workplaces. A large majority of DHHS employees currently make less than $12.25 per hour, even those who have worked for the state over 20 years.

The union workers at the Kinston rally were specifically calling for all pay scales to be increased to at least $15 per hour. They called for state, city and all levels of government to pay workers a living wage.

Currently, employees at many DHHS facilities do not get paid for overtime, despite being forced to work hundreds of hours of overtime every year due to understaffing.  The rally demanded payments for overtime work, not compensatory time, because workers, their communities and the Kinston economy are losing hundreds of thousands of dollars annually from this policy.

“You wanna know why we are always coming to work tired?” retorted Robbin Clarke-Hines, a union member and DT-2 at Caswell Center. She continued, “It’s because we are forced to work two jobs to make ends meet.  And when we work overtime at Caswell, they take our personal time and don’t want to pay us.”

The rally also demanded the internationally recognized right for public workers to collectively bargain, a right banned under state General Statute 95-98.  In recent years, the United Nations International Labor Organization has ruled that this state law banning collective bargaining rights for public employees is a violation of international human rights.  The workers are also requesting to have a representative in grievance meetings, to defend themselves against unfair disciplines and firings.

The rally had a third demand which centered around the national movement most commonly known as “Black Lives Matter,” calling for an end to police killings. The workers at the rally support the demand for justice for those killed by police, but are also extending the demands into their work places, saying that “Black workers’ lives matter too!”  They are demanding the DHHS facilities hire enough staff and provide proper equipment to reduce injuries in Black majority jobs.

“My story reads like this,” stated Bonita Johnson, veteran 21-year employee of DHHS at Murdoch Center. “I’ve been standing on my feet over 20 years for the state. Eight years I’ve had to work a second part-time job because of my low wages. This created a disease in my feet called plantar fasciitis. But the state refuses to pay my workers’ compensation. We say Black lives matter at work too!”

Peggy Briggins Price, a DT-1 at Caswell, added to the concerns about injuries when she stated, “Injuries would not happen like they do at Caswell if we had proper equipment, such as floor mats.“

Simultaneous with the Kinston rally, there were other rallies in the rural eastern part of the state. “Over People” picketed and rallied at city of Greenville City Hall. The rally included fast food workers, adjunct professors at nearby universities, public workers and the Pitt County Coalition Against Racism.  Workers from the Rocky Mount Engine Plant and other members of UE150 rallied at Rocky Mount City Hall.

The city of Greensboro recently adopted a commitment to raise all municipal workers’ salaries to $15 per hour over the next few years. This is a growing trend across the state, the U.S. South and the entire nation. Birmingham, Ala., passed a similar ordinance, following on the heels of Seattle; Los Angeles; Oakland, Calif.; New York; and many other areas.