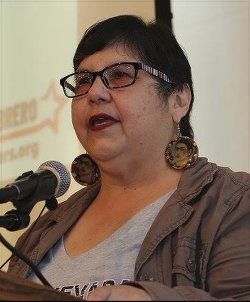 Workers World Party is announcing today that we are entering the 2016 presidential elections.

Our party does not aspire to be in the White House. It was founded on slavery, on the genocide of Native people, on the robbery of Mexico and on imperialist plunder abroad. It reeks with the blood, sweat and tears of countless workers who have been exploited and crushed by this system, not just from the U.S. but from around the world.

We are told that this is the most democratic country in the world. But a tiny elite rule this country. You cannot become president without millions of dollars. The real issues are never voted on — like a raise in the minimum wage.

But for a year, the airwaves will be filled with news about the elections.

In 2008, the masses were riding high. Youth, people of color and progressives — all thought that a Black president might mean real change. There was hope.

But no election can change capitalism. Workers are suffering more and more. Student debt is atrocious. Anti-trans violence is criminal. Mass incarcerations and deportations are criminal. Anti-Muslim racism is sickening. Attacks on women go on and on. Queer people still don’t have full rights. Racism and police terror are carried out with impunity. Black and Brown people are shot down in the streets like dogs.

This is why we are running a revolutionary election campaign to remind the people that it does not matter who is in the White House — what matters is who is in the streets.

Our candidates won’t just be talking about our revolutionary platform. They will be at demonstrations, rallies, meetings — as they have been doing most of their lives. They will travel across the country and raise the need for struggle independent of the capitalist parties.

They’ll show that racism is not just an issue for Black and Brown people. This is an issue for white workers as well, because racism is meant to divide and conquer the working class.

Our candidates will explain we don’t want just a softer, kinder capitalism or a bigger share of the wealth the workers create. Build the struggle, fight back, don’t accept the Republican Tea Party bigots and neofascists. But don’t accept the Democrats either, because they want to maintain the status quo.

As a Latina, as a comrade and activist who has been fighting for Chicano liberation and defense of immigrants for a very long time, I say: The road to Latino liberation is through the Black struggle. Latinos need representation and liberation, all right, but they need unity in order to win that liberation.

The road to unity for our class as a whole is through the Black struggle. Elections will matter when Black lives matter — and of course when Brown lives matter, when the lives of poor and working people matter.

But workers’ lives won’t matter until we have a socialist revolution right here in the belly of the beast. And one of the surest ways to bring socialism — revolutionary socialism, the workers running all of society — is through unconditional and firm solidarity with the Black struggle.

So in the wake of Ferguson and Baltimore, for Trayvon, Eric, Tamir, Sandra Bland, Manuel Angel Diaz, Islan Nettles, and all victims of police terror, I am so proud to present our WWP candidates for the 2016 election: Monica Moorehead for president and Lamont Lilly for vice president.