Tremors anticipating another earthquake are sending shivers through the capitalist markets. Recent articles in the New York Times, Washington Post, Wall Street Journal, Bloomberg Report and other major corporate media are warning of an impending crash.

In the U.S., basic commodity prices have collapsed, and there is a huge glut of oil, iron, coal, copper, zinc, heavy equipment and machine parts. There is also a rash of mergers and drastic reorganization. Major crops such as corn — used in biofuels, food and animal feed — along with soy and wheat are selling at half of last year’s price. Banks are suddenly less willing to lend to giant energy and mining corporations. 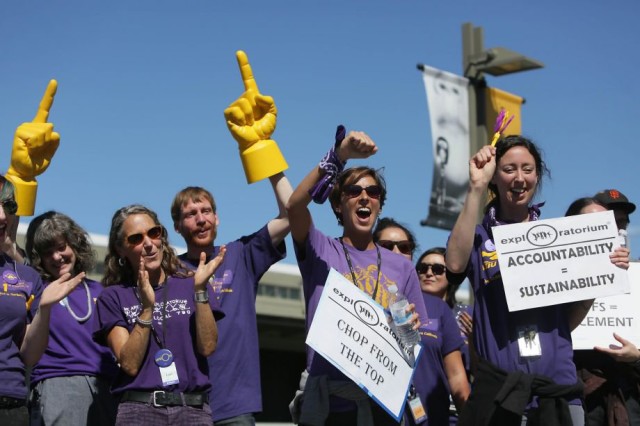 Most ominous for the working class are announcements of big layoffs, in the tens of thousands of workers in key industries like Alcoa, Caterpillar, John Deere, DuPont and Hewlett-Packard.

An article in the Oct. 25 New York Times titled “A Global Chill Hits Home” described the collapsing markets and interlinked industries. As crude oil has fallen from over $100 a barrel a year ago to $45 today, more than two-thirds of the 1,500 operating oil rigs in the U.S. have been decommissioned. The billions that had poured into the environmentally ruinous oil-fracking industry and Arctic drilling are suddenly on hold.

Adding to investors’ unease was an earlier soft report on the U.S. housing market and the release of internal economic forecasts by the Federal Reserve Bank, explained the July 24 Wall Street Journal. “A Global Recession“ was the ominous headline of a Washington Post article on Sept. 29.

Too big a surplus to sell

Steel production is collapsing.  U.S. Steel is now operating at 58 percent of capacity. The largest part of its production has been used for steel tubing in oil pipelines and the lining of oil wells. While typically the company accumulates four months’ inventory of steel tubing, it is now 10 to 12 months. This is a global glut. Much of the market now is for steel from South Korea and China.

Banks are nervous about further lending because their portfolios are at risk.  Oil and energy stocks held as collateral by banks to underpin loans they have advanced have lost half their value. As prices fall, so does the value of the stocks guaranteeing the loans.

Investments in 22 raw materials tracked by Bloomberg News on Sept. 30 posted their worst quarter since the 2008 global financial crisis. More ominous are forecasts for the slowest economic growth since 1990. Morgan Stanley has warned that more losses may be ahead.

As sales of John Deere heavy equipment dropped by 30 percent in the last quarter, its earnings sank by 40 percent, and 1,500 workers were laid off. Hewlett-Packard laid off 30,000 workers. Caterpillar just announced a layoff of 10,000 workers.

Fortune magazine’s listing on Oct. 2 of the 10 biggest layoffs of the year so far declared: “This year is already uglier than last, and it’s only October.” According to outplacement firm Challenger, Gray & Christmas, employers have announced 493,431 planned layoffs so far this year — a 36 percent increase over the same period last year.

Almost every article on the collapse in commodity prices or the possibility of a new global crash blames the capitalist crisis on a slowing of China’s growth. As Bloomberg Report explained: “China is the biggest user of energy, metals and grains.”

But Edward L. Morse, the head of Citigroup’s global commodities research, also took note of that country’s historic achievement that had driven up world markets: “Between 1993 and 2013, China built 200 cities of 1 million people or more. This was incredibly intensive in terms of steel, copper and other commodities.” (New York Times, Oct. 23)

In fact, for 300 years, since long before China’s spectacular rise, crises of overproduction have upended capitalist economies every 7 to 10 years. The boom-and-bust, expansion-and-contraction cycles leading to capitalist overproduction were described by Karl Marx over 165 years ago. They make capitalism an unstable, crisis-ridden, self-destructive system of production.

This crisis of too much capacity results in masses of unsold and unsalable products and increasing capitalist competition in ruthless and unpredictable ways. Capitalists don’t produce goods just to satisfy a social use or need. Can this commodity be sold at a profit is their overriding motivation.

Now technology has developed industry and agriculture on a global scale to the point where each time the capitalist economy starts up again, the market more quickly reaches a point of saturation.

Traditional capitalist methods used since the Great Depression of 1929 to pull the economy back up and ensure profits to a small handful of corporate owners have already been employed. For years the Federal Reserve has been holding interest rates at close to zero in a desperate attempt to spur business activity.

Government bailouts of the banks and corporations also have a limit. Forbes Magazine of Sept. 20, 2011, reported that $16 trillion had been allocated in the U.S. and internationally after the 2008 crisis to keep the capitalist system afloat and profitable. Since that report, the federal government has continued pumping in additional billions.

A trillion dollars in annual U.S. military spending, direct and indirect, is a continuing subsidy to the largest oil and military firms and another form of corporate bailout. This deadly subsidy puts the entire planet at risk and nurtures a viciously repressive war machine.

But none of this solves the problem of overproduction; it just temporarily absorbs some of the surplus. And the money for these bailouts is stolen directly from the workers as budgets for education, health care and government assistance are cut just as need for them increases.

No recovery for workers

What makes a new capitalist crisis most dangerous for the working class is that there has been no real recovery for the workers since the crisis of 2007. While the crisis was declared over in 2009, millions of workers were never rehired. Millions have given up looking for work, and are not counted in the unemployment statistics.

A far more accurate measure than the official unemployment figure is the number of people participating in the workforce, which is now at the lowest level in 30 years, despite population growth. This is the longest period of job loss since the Great Depression of 1929, and the capitalist have no solution.

Wages are no better than what they were in the 1990s. According to the Economic Policy Institute, “In the past 12 years wages fell for 70 percent of workers.”

High rates of home foreclosures, unemployment and stagnant wages have continued relentlessly. Four out of five U.S. adults struggle with joblessness, near-poverty or reliance on welfare for at least part of their lives, a sign of deteriorating economic security.

Poverty rates are now the highest in the 52 years they have been recorded. Poverty among Black and Latino/a workers has been nearly three times the rate of whites, reported the Associated Press of Dec. 17, 2013.

These are the unsolvable problems that can grow far worse as a new capitalist downturn rips through the global economy. Every effort to save corporate profits will be made, including drastic cutbacks in social services, monstrous austerity programs and bone-deep cuts in pensions.

As capitalist economists and bankers conspire to seize hold of every source of wealth to guarantee their profits, it is essential for the workers’ movement to anticipate what is coming and not be taken by surprise.

The upheaval and massive insecurity of the capitalist system in crisis can propel workers in a revolutionary direction. Understanding why the capitalists cannot solve the enormous problems of plenty alongside desperate poverty is essential for the struggles ahead.

For a detailed analysis of the impact of the rapid changes in productive forces under capitalism, see the book “Capitalism at a Dead End” by Workers World contributing editor Fred Goldstein.