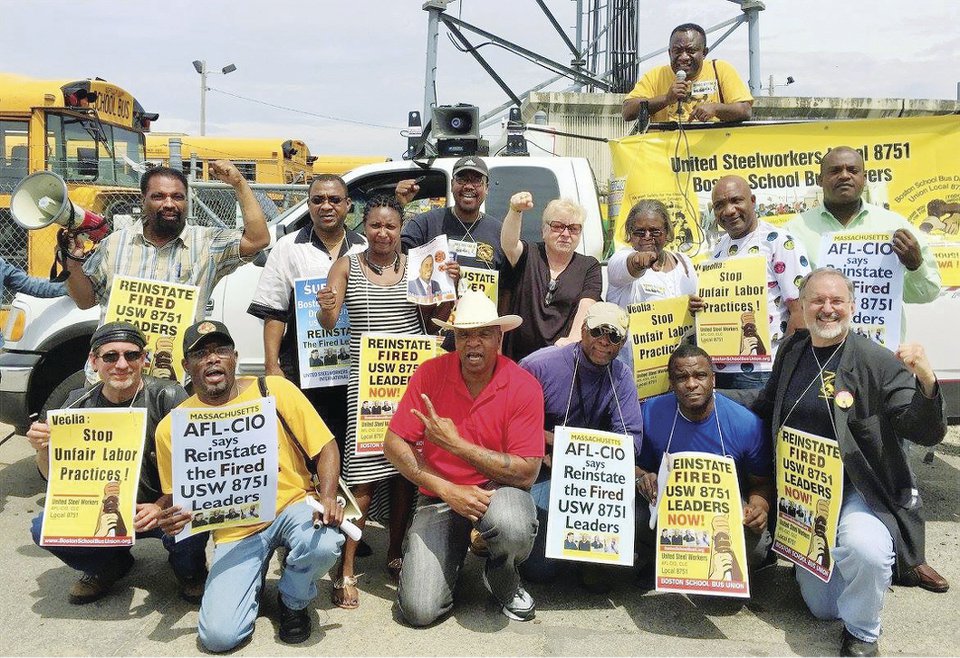 On Nov. 7, Team Solidarity — the Voice of United School Bus Union Workers — will send a busload of activist leaders from United Steelworkers Local 8751 and supporters in Boston to participate in the Workers World Party National Conference in New York City.

At its October membership meeting, Local 8751 voted to pay part of the cost of the bus, acknowledging the support Workers World has given to the bus drivers for decades. “Workers World is doing a good job altogether,” said President Andre François, one of the four union leaders fired by Veolia/Transdev two years ago. “The union has benefitted from Workers World. One of the founders is a Workers World member. I look forward to going to the conference every year and we always have a great time. We learn a lot.”

This will be the third year in a row that François has attended and the third that the union has sent a bus. Last year, Team Solidarity gave a detailed update to the party, appealing for solidarity in their struggle. The drivers joined conference participants in a march on Veolia’s Manhattan offices to “Say No to Veolia’s union busting” and to demand the immediate reinstatement of the fired union leaders!

“We met with activist leaders from cities across the country as well as international guests, including an impressive delegation from revolutionary Cuba,” said vice president and fired union leader Steve Kirschbaum. “The conference provided a unique opportunity to learn, discuss, deliberate and formulate strategy for fighting back against the ravages of capitalism and the union-busting, racism, sexism, LGBTQ oppression, discrimination against people with disabilities, immigrants and youth and other evils that it breeds.”

Much has developed in the union’s ongoing struggle since last year’s conference. Local 8751 has successfully beat back the Veolia/Transdev/Boston Police, anti-union, felony frame-up of Vice President Kirschbaum with a militant worker/community defense.

Last April, Team Solidarity, led by the four fired leaders, swept every position in the union’s Executive Board election in a historic landslide victory. The new board has brought rank-and-file activist unionism into every bus yard every day of the year. The union continues to demand a just contract with no concessions, the reinstatement of the illegally fired leaders and an end to the racist austerity cutbacks to public education.

“This past year, the fighting rank and file of USW 8751 have been visited by countless ‘Solidarity Boots on the Ground’ contingents from Workers World branches throughout the country, standing shoulder to shoulder with us in the finest tradition of union solidarity, marching in pickets, rallies, packing the courtroom and the 101 organizational tasks required to successfully carry out the struggle,” the team stated in a leaflet about the bus trip.

“We will be forever indebted and grateful for this exemplary solidarity in action! We know that we will win! Our contingent this year will be looking forward to meeting with old friends and comrades in battle as well as meeting new ones and preparing the continuing struggle to build a better world — a Workers World!”