Oct. 26 — South African President Jacob Zuma announced a moratorium on planned tuition increases of 6 percent on Oct. 23. These fee hikes were scheduled to go into effect for 2016 as Africa’s most industrialized state faces a burgeoning economic crisis of sluggish growth and increasing uncertainty in the labor market.

The president’s proclamation came as two weeks of student protests closed universities  in Pretoria, Fort Hare, Johannesburg, Cape Town and other cities and towns. The Twitter hashtag, #feesmustfall, became a rallying cry for students throughout South Africa. They demonstrated in the streets, at the parliament building in Cape Town, the Union Building in Pretoria and even outside the ruling African National Congress party headquarters at Luthuli House. 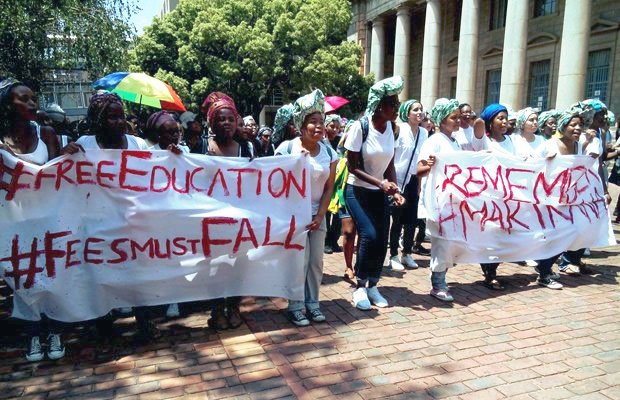 At the University of Witwatersrand in Johannesburg, a premier higher educational institution, administrators closed the campus after protests on Oct. 14. These demonstrations rapidly spread to other campuses and shut many down.

Government officials and vice chancellors, who were meeting in Durban the week of Oct. 12 during the National Education Summit to discuss the state of higher education, were taken off-guard by the protests. Witwatersrand University’s Vice Chancellor, Professor Adam Habib, was compelled to leave the conference and immediately return to Johannesburg to meet with protesting students.

The administration at Witwatersrand, which is at the center of the nationwide dispute, had proposed increases in registration, tuition and accommodation fees by an average of 10 percent for 2016.

Despite Zuma’s announcement, student protests continued on Oct. 26. At Witwatersrand, student activists interrupted a university senate meeting designed to discuss the resumption of the academic program. They demanded the senate address the demand for free university education, among others.

The Oct. 26 South African Mail & Guardian reported that on most campuses students continued the protests: “They are demanding free education for all and that universities stop the outsourcing of staff and services.”

The problem of higher education affordability is a manifestation of the increasing economic crisis in South Africa where the government, due to its adoption of neoliberal policies, has been unable to implement free education, a mandate of the 1955 Freedom Charter.

Since the ANC took office in 1994, assistance to students pursuing postsecondary education has increased substantially. Nevertheless, these measures have not adequately met the demands of working-class and poor communities.

Additionally, South Africa’s university system allows individual schools to determine internal governance issues such as fee increases, and student and labor affairs. Many aspects of the former apartheid system of institutional racism and class bias remain in the functional framework of education.

On Oct. 21, when Minister of Finance Nhlanhla Nene was delivering the midterm budget before parliament, police were using teargas to disperse the thousands of students demonstrating outside the building. That did not deter the students from battling with security personnel.

Nene reported that the national debt has grown from 26 percent to 47 percent of the gross domestic product since the 2008-09 global economic crises when South Africa instituted countercyclical measures to combat the downturn. The growth of debt service is a major concern for bond ratings agencies, which can determine the cost of borrowing and foreign capital’s investments in the national economy.

These developments are aggravated by the decline in the rand’s value, which has slipped to the level of more than 13 to 1 against the U.S. dollar; it was about 7 to 1 in 2007. Nene’s administration expects the debt to rise another $44 billion over the next three years, while stabilizing as a percentage of the GDP.

Debt service is the government’s fastest growing expense. Many of these difficulties stem directly from declining prices for commodity exports — and capitalist relations of production, where private businesses seek to cut labor costs amid declining currency values.

The Minister of Higher Education and Training, Dr. Blade Nzimande, who is also the Secretary General of the South African Communist Party, has been criticized for not acting decisively to solve the problems of increasing fees for education. The South African press also reported that some youth leaders, including newly elected ANC Youth League President Collen Maine have called for Nzimande’s resignation.

Others in the Tripartite Alliance — the ANC, SACP and Congress of South African Trade Unions — have rejected what they describe as “scapegoating” of Nzimande, saying that the problems of higher education cannot be assessed independent of the overall capitalist crisis.

Nzimande told the South African press agency eNCA on Oct. 26, “There is enough money in this country. The problem is that a lot of it is in the private sector.” He added that “not all universities can afford to pay even a cent towards this” and that although the higher education sector is largely funded through state revenues, the private sector must increase support.

The SACP, ANC, along with the Economic Freedom Fighters, the Democratic Alliance and other opposition parties, have taken varying positions on this question in a wide-ranging debate. Accusations from elements in the ANC and the SACP say they support the demand for free education. However, there could be other political aspects to the struggle and views about the demonstrations.

A polemic between the SACP and the ANC has surfaced about the ANC’s National General Council held Oct. 8-11. The African Communist, a theoretical journal of the SACP, openly criticized the General Council’s program in its third quarter issue, saying there needs to be a move away from neoliberal economic policy through larger state spending geared toward correcting the legacy of apartheid and colonialism.