The Texas Health and Human Services Commission stripped Planned Parenthood of its Medicaid contracts on Oct. 19. Defunding was based on alleged violations of its fetal tissue donation program.

Such allegations stem from widely discredited, deceptively edited videos issued in July by the anti-abortion, so-called Center for Medical Progress. The videos insinuate that Planned Parenthood engaged in selling fetal tissue for profit. CMP, currently under investigation in California for fraud, is closely associated with far-right, anti-abortion, bigoted groups like Operation Rescue, which has a history of arrests for blockading clinics and harassing patients. 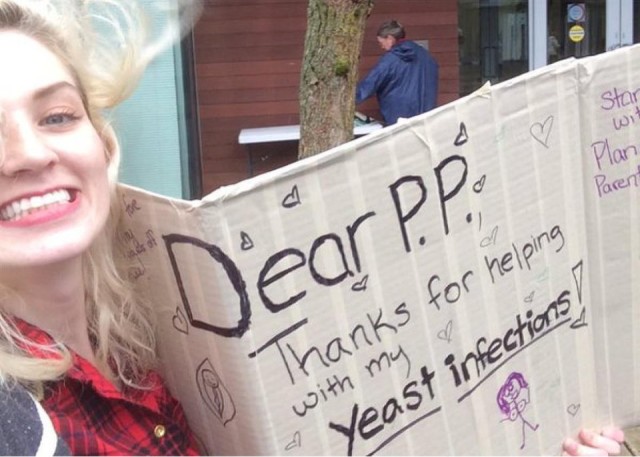 Anti-choice bigots picketing a Planned Parenthood clinic and harassing patients Oct. 25 in Portland, Ore., were stopped cold when Mary Numair, a PP supporter, came outside with her sign thanking PP and chanted loudly, “Yeast infections! Yeast infections!” one of many health problems treated by PP.

Meanwhile, Planned Parenthood, the largest national provider of reproductive health care services for women, announced on Oct. 13 that it would no longer request reimbursement from research centers for fetal tissue donations, which are vital in creating lifesaving vaccines and medicines.

To serve the subpoenas, investigators from HHSC’s Office of Inspector General arrived without warning at Planned Parenthood facilities in San Antonio, Dallas and Houston and gave the clinics 24 hours to deliver thousands of pages of documents. Ken Lambrecht, head of Planned Parenthood of Greater Texas, called this “a politically motivated … fishing expedition.”

That charge appears accurate, reported Mother Jones on Oct. 22, because a reporter arrived at the Planned Parenthood clinic in San Antonio at the same time as state investigators. The state’s raid, noted the magazine, seemed to be “looking for an excuse to justify its politically motivated actions.”

Also on Oct. 21, the Ohio Senate passed a bill defunding Planned Parenthood. Pro-choice Sen. Edna Brown condemned the bill because it disproportionately impacts low-income women. “There is no one, no one but Planned Parenthood in poor and African-American communities.” (RH Reality Check, Oct. 22)

Though the House of Representatives held a hearing on Planned Parenthood on Sept. 29, during which President Cecile Richards stood up to hours of insulting demands and harangues by anti-abortion critics, the House announced Oct. 23 that it is convening yet another investigation. The eight Republican members of the Select Investigative Panel have “100 percent ratings from the National Right to Life Committee,” reported the Huffington Post on Oct. 23.

Pro-choice Democrats criticized the new panel and said they may boycott it as it is a waste of taxpayer dollars.

RH Reality Check Editor-in-Chief Jodi Jacobson compared watching the Sept. 29 hearing to “witnessing an inquisition” like those of anti-communist Sen. Joseph McCarthy in the 1950s. (Oct. 5) She pointed out that no evidence was presented to substantiate charges of selling fetal tissue for profit. She denounced charges against Planned Parenthood as lies and demands for lists of providers, clinics and staff as ways to intimidate and frighten people.

A startling example of today’s McCarthyism is the website set up Sept. 28 by the deep-pocketed anti-abortion group known as the Alliance Defending Freedom. (Oct. 22) The purpose of the site, getyourcare.org, is to provide “alternatives” to Planned Parenthood if it is defunded nationally. The website, based on data from lists of Federally Qualified Health Centers and Rural Health Centers, is supported by 17 of the country’s most prominent anti-abortion groups, including the ultraright Family Research Council, which is also hostile to same-sex marriage.

Yet when RH Reality Check writers called dozens of these facilities, they discovered elementary, middle and high schools; homeless shelters; nursing homes; pediatric centers; and even the District of Columbia jail. All of them said they were not prepared to provide reproductive health services for poor women.

Drawing a parallel between McCarthyism and today’s reactionaries is spot on. These right-wingers seek to promote their ruthless austerity agenda against oppressed and working people, while lining the pockets of the already-rich.

The attacks on Planned Parenthood — because they strike at the quality of life for millions of poor women of color, youth, immigrants, women who are homeless due to domestic violence, women with disabilities and rural residents — are integral to that reactionary agenda.

All progressive people must join the fightback to defend Planned Parenthood.