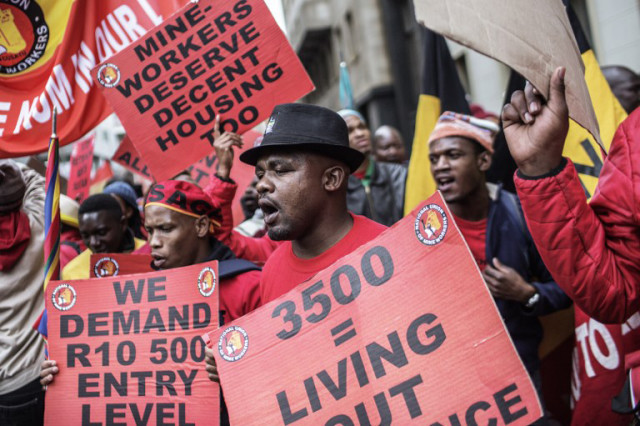 An agreement between the National Union of Mineworkers (NUM) and several coal sector firms ended a more than one-week strike involving thousands of employees. Workers returned to their jobs on Oct. 14.

This was the first coal strike related to wage negotiations since 2011.  Bosses and unions began conciliation talks after reaching a deadlock in negotiations in August. The NUM, which represents 72 percent of the 17,000 employees covered by the wage deal, had demanded increases of as much as 14 percent for its members.

On Oct. 9, mining companies including Anglo, Glencore and Exxaro Resources Ltd. presented a revised two-year deal. Further changes to the deal were made on Oct. 12. The final agreement adds an extra 750 rand ($56) to 1,000 rand ($74) to monthly wages; the sum will be paid retroactively to June.

Several factors have contributed to the current downturn in the overall economy in South Africa: One is the more than two decades of problems that developed within the mining industry. The mining of gold, diamonds, coal, iron ore and platinum had turned South Africa under apartheid into the largest industrial center on the African continent.  Other industries such as manufacturing would have never reached significant levels without labor- intensive mining.

The organization of the majority of African mineworkers during the 1980s led to the founding of the Congress of South African Trade Unions (COSATU), which became a key ally of the African National Congress (ANC), even under the former apartheid system. This altered the relationship between labor and capital. The NUM demanded higher wages from mine owners and was in a position to shut down production, which the union did during major work stoppages in the 1980s.

The struggle for better wages and working conditions was firmly linked to the demand for an end to legalized racism and colonialism. Since the ANC took power in South Africa in 1994, there has been tremendous downsizing in the mining industry; the number of workers employed has declined precipitously from about 800,000 to below 500,000.

An article written by Dr. Declan Vogt of the University of Witwatersrand School of Mining Engineering says: “Our deep level gold and platinum mines are in trouble. At today’s prices, most are not profitable. There are many explanations for the high cost: mines are getting deeper, infrastructure is old, and energy and labor costs exceed inflation.”

It continues: “Given that we have little control over the price of the commodities, the only solution is improved productivity. … In many other industries, technology has enabled huge strides in productivity. Even in South Africa, almost all underground coal mining is now mechanized.” (Mineweb, Oct. 18)

Mine owners say the mechanization of the South African mining industry is  due to “rising costs of production.” For more than three decades, militant mine workers seeking improved wages and working conditions have pressured the owners, who always aim for higher profit margins.

Consequently, mine owners have used other methods to reduce labor costs: massive layoffs, increased workloads and cutting real wages. Even in the platinum sector, which mines the majority of that strategic metal globally, more than 10,000 workers have been laid off in the last two years.

Since the major strike in Marikana in the Northwest Province in 2012, the platinum sector has experienced major changes. Owners have threatened to lay off up to 35,000 workers, while the ANC government has pressured the capitalists not to cut more jobs.

Mining firms have reaped billions of dollars in profits from exploiting African labor for the last 150 years.  A major mining company, Anglo American PLC, was formed by Sir Ernest Oppenheimer and U.S. bank J.P. Morgan & Co. in 1917. Capital was raised from British and U.S. sources.

When workers today demand a greater return on their productivity, owners seek ways to undermine their rights to a decent wage and living standard. Without the working class’s militant organizing and activism, the ANC would not have been able to gain a majority within the nonracial government which took over in 1994.  Therefore, the ANC cannot ignore the plight of union members in the struggle against the bosses without damaging its relations with its popular base.

Ngoako Ramatlhodi, former South African mines minister, said the ANC government was “alarmed at the rate at which retrenchments [layoffs] have been taking place in the industry.”  (Financial Times, May 25)

Nonetheless, despite this crisis, the government will not take control of the mining industry and nationalize it under workers’ control to halt the retrenchments and redirect mineral production based on the laboring class’s interests. Such measures would prove popular among the masses, but would prompt a response less than positive among the mine owners, international financial institutions and Western governments.

In the mining industry’s platinum sector, blame can be apportioned to the owners who overproduced during the commodities supercycle in the 2000s, and consequently have been faced with weak prices and rising costs. As it is with global capitalism, the workers are forced to bear the brunt of owners’ and executives’ mistakes.

The reduction in commodity prices has resulted in many global financial problems, particularly in the so-called emerging economies. Capitalist states in Europe and North America are concerned by the increasing independent efforts of Brazil, Russia, India, China and South Africa (the BRICS).  The BRICS have proposed the formation of an alternative global lending institution that could challenge the International Monetary Fund and the World Bank.

However, it will take a movement of the working class, farmers and the nationally oppressed to reverse the economic policies of the ruling classes, whose primary aims are to increase profits.