The Baltimore Workers World Party branch meeting on Oct. 11 featured veteran African-American longshore workers Clarence Thomas and A.J. Mitchell. Both had attended the Justice or Else commemoration of the 20th anniversary of the 1995 Million Man March a day earlier. 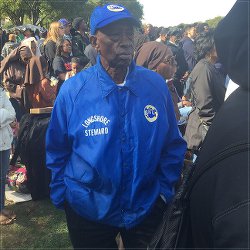 Brother A.J. Mitchell, ILWU Local 10 pensioner was amongst the hundreds of thousands who attended “Justice or Else,” the 20th anniversary of the Million Man March in Washington on Oct. 10. He also attended the March on Washington in 1963 and the Million Man March in 1995. Other ILWU members that were in attendance included Local 19 members Jerome Johnson, John Kruski and Anthony Lemon; Gabriel Prawl of Local 52; and Clarence Thomas of Local 10.
Photo: Rochelle Mitchell

Thomas and a delegation of International Longshore and Warehouse Union members from various locals had only a month ago attended the Charleston, S.C., “Days of Grace” Labor Day march, rally and conference, in the aftermath of the racist murder of nine women and men at the historic Mother Emanuel African Methodist Episcopal Church, as well as the videoed police killing of Walter Scott. The longshore workers traveled from the West Coast to demonstrate solidarity with International Longshore Association Local 1422, whose membership lost family in the church murders.

So it was in Charleston that an ILWU Local 10 resolution calling for a “National Day of Mourning” on May 1, 2016 — International Workers’ Day — was announced. And it was news that broke the night before on Oct. 10 of reports justifying the police slaying of 12-year-old Tamir Rice in Cleveland that focused Thomas’ reflections on the Million Man March, the 10th Anniversary of the Millions More Movement and Justice or Else.

Thomas recalled that the 1995 Million Man March was on a work day, yet huge crowds of working-class Black men traveled to Washington, D.C., instead of reporting to their jobs. Although the call was from Nation of Islam leader Minister Louis Farrakhan, most of the attendees were not Muslims or adherents of the NOI. Thomas appreciated the difficulty of motivating and organizing such a huge outpouring during a work day based on his more than 30 years of activist experiences in the Northern California labor movement and in organizing the Million Worker March in October 2004.

Yet organized labor did not have a voice at these events, except at the 2005 10th anniversary Millions More Movement. Pat Ford from the Service Employees union, Chris Silvera from the Teamsters National Black Caucus and Thomas all spoke from the platform after Farrakhan had spoken at an earlier TNBC Educational Conference. In his talk Silvera challenged the Bush administration for suspending prevailing wage requirements, opening the door to substandard wages for the cleanup of the devastation from hurricanes Katrina and Rita. Facing wide opposition from the labor movement, the Bush administration reversed itself. But not the least was the voice representing 400,000 Black Teamsters on that stage.

Referring to the just-released report laying groundwork for the exoneration of the cops who killed Rice, Thomas thought that if the police were not held responsible there might be a large response to a National Day of Mourning on May Day in ports across the U.S. “That could be the spark,” said Thomas.

To be heard, labor must shut it down, Thomas asserted: “That is the only leverage we have. All of this talk means absolutely nothing. We have had discussions about cameras on dashboards, cop’s body cameras, and they still are killing us.

“If we can get longshore workers across the country to shut down for eight hours on International Workers Day 2016 — and it is on a Sunday — I think we may be able to get some real serious discussion about income inequality and structural racism.”

In response to a question about organizing a general strike when most workers — especially young Black workers most directly affected by police brutality — are non-union, Thomas clarified that the proposal was for the ILWU and the ILA longshore workers to take action. But he also pointed out that some of the most effective mass actions have been by unorganized workers, including the 2006 Great American Boycott of Latino workers. In 2006, 90 percent of the port at Los Angeles and Long Beach was shut down not because of the ILWU, but because the immigrant port truckers didn’t come to work.

“We are not suggesting that you go out on the same day,” Thomas said. “It is important for the longshore workers to do it. We could have rolling strikes. The day before May Day for fast food workers. That would really light them up. We don’t have one general strike. We could have a whole bunch of strikes on different days.

“If people are wondering what they can do after the Justice or Else gathering, this is something workers can do. Shut it down on May Day all over the country. Let’s get it going.”