Syracuse, N.Y. — The 165-mile “UnDrone Upstate Walk” stepped off Oct. 7 with a protest at Hancock Air National Guard Base in Syracuse. Marchers then headed out on a two-week journey to the Niagara Falls Air Reserve Station. 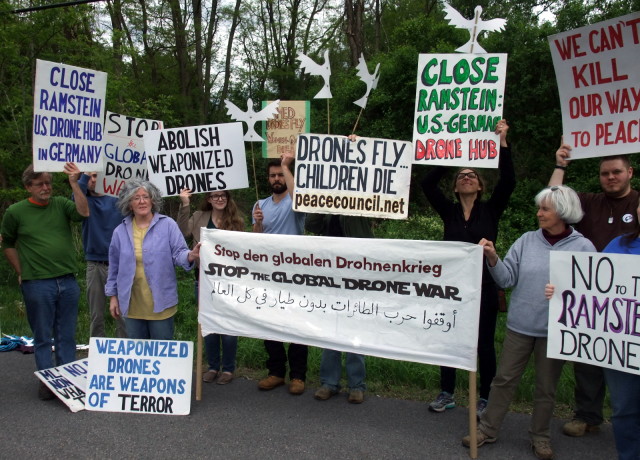 Murderous imperialist U.S. wars are increasingly “normalized” through use of remotely flown drones. The 107th’s commander, Col. John J. Higgins, said in an interview: “You can drop off the kids in the morning, fly a mission wherever they need you, maybe even pull a trigger. And 10 hours later, you’re done and you go pick up the kids.” (Buffalo News, Oct. 10)

Organizers emphasize the importance of the Walk, as the U.S. Department of Defense plans to up its drone use by 50 percent in the next four years. Drones are now the “backup” to Afghan forces on the ground in place of U.S. soldiers.

The Walk was organized by the Upstate Coalition to Ground the Drones and End the Wars. Since 2010, the coalition has battled the killing inflicted by U.S. drone warfare, using civil disobedience arrests and creative mass protests. The group has run television ads urging Army Reserve drone operators to refuse to commit war crimes. (upstatedroneaction.org)

The Walk will include more than a dozen stops, from small towns to big cities. A forum in Rochester will be on “Drones, Black Lives Matter, the European Refugee Crisis: What Do They Have in Common?”