Despite another promise to cease its fire and withdraw heavy weapons from the front line, the Ukrainian military has intensified its attacks on the Donetsk and Lugansk People’s Republics in the Donbass region. The Kiev regime’s army committed 22 violations of the ceasefire on the Oct. 10-11 weekend alone, killing both civilians and soldiers.

It’s not hard to see what inspired the latest escalation of war crimes by Kiev.

On Oct. 7, the U.S. Senate passed a $612 billion “defense spending” bill for the 2016 fiscal year, which began Oct. 1. Included in this bill is $300 million in direct military aid to the right-wing regime in Ukraine; this item is the brainchild of Republican Sen. John McCain. Earlier, the House of Representatives passed a similar measure.

While it’s unclear at this time whether President Barack Obama will sign this particular version of the “defense” bill, both Republicans and Democrats in Washington are committed to spending billions to continue U.S. wars for world domination, both direct and, as in Ukraine, by proxy.

Up to now, Obama and Secretary of State John Kerry have preferred to keep so-called “lethal military aid” to Kiev hidden from view. They prefer secret transfers or those by third countries loyal to Washington, such as NATO member Poland and Gulf monarchy Qatar. But Secretary of Defense Ashton Carter and Obama’s nominee to head the Joint Chiefs of Staff, Gen. Joseph Dunford, have joined McCain’s call for the direct arming of Kiev.

Meanwhile, lost from the discussion is an amendment introduced by Rep. John Conyers and passed by the House last June prohibiting the Pentagon from arming and training the openly neo-Nazi Azov Battalion of the Ukrainian National Guard. 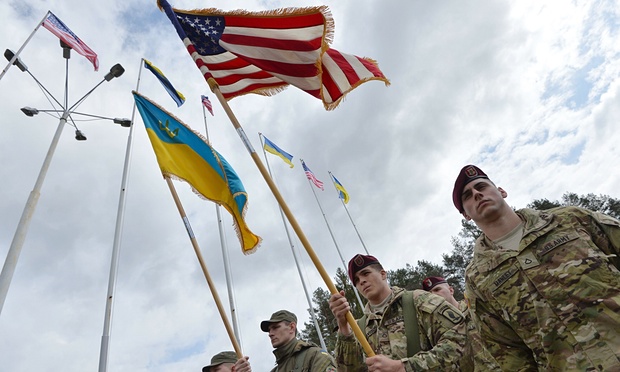 After a “pilot program” training Azov personnel earlier this year, the commander of U.S. forces in Europe announced the expansion of the training program in September for active-duty Ukrainian National Guard troops.

The National Guard was set up after the right-wing coup in Kiev in February 2014 to integrate fascist gangs and paramilitary groups into the state apparatus. Now Washington sees it as the basis for an all-new, NATO-trained Ukrainian military.

Passage of the $300 million in military aid to Ukraine was another signal that Washington remains committed to both propping up the criminal junta that it helped bring to power and continuing the war against the anti-fascist people’s movement in the Eastern Donbass region. This war is ultimately against neighboring Russia.

For over two decades, U.S. imperialism has been steadily marching toward its goal of busting up the Russian Federation and preventing its consolidation as a capitalist power independent of Wall Street and Washington.

To this end, the NATO military alliance has been expanded to Russia’s borders. Domination of Ukraine, its integration into NATO and the destruction of the resistance in the Donetsk and Lugansk People’s Republics is a big next step in that strategy.

The heads of state of Germany, France, Russia and Ukraine – the so-called Normandy 4 — met in Paris Oct. 2 for negotiations on the long-stalled Minsk 2 ceasefire agreement between Ukraine and the independent Donetsk and Lugansk People’s Republics.

Despite rumors that French President François Hollande and German Chancellor Angela Merkel took a harder-than-usual stance to make the Ukrainian oligarch, President Petro Poroshenko, enact constitutional changes and laws required by the Minsk agreements, the Kiev junta’s rhetoric and actions since the Paris meeting have remained as belligerent as ever. The Ukrainian parliament, for example, voted to legalize the use of foreign mercenaries in the Ukrainian Armed Forces.

The only tangible concession granted at the Paris meeting came from President Vladimir Putin, who agreed to use Russian influence to pressure the governments of Donetsk and Lugansk to postpone local elections scheduled for Oct. 18 and Nov. 1. As a result, the elections were postponed in the Donbass, with possible new dates projected for February, March or April 2016.

Even before the Paris talks, the tone of the official leadership of the Donbass republics was more conciliatory about the possibility of Donetsk and Lugansk being reintegrated into Ukraine — if only Kiev carries out its end of the Minsk agreement.

Of course, the people of the Donbass desperately want and need peace. According to the U.N., more than 8,000 people have been killed since the start of Kiev’s “Anti-Terrorist Operation” last year — but most experts believe the number is far higher. Close to one and a half million people have been displaced by the war, with the majority fleeing as refugees to Russia and Belarus. Industry has ground to a halt. Poroshenko’s government has cut off all social payments, such as pensions, leaving many completely dependent on aid from the Russian government and private humanitarian initiatives.

But as Donbass leaders have frequently acknowledged, while affirming the importance of the Minsk negotiations, there is no possibility of peace while the far-right coup regime of oligarchs, neoliberal politicians and fascists rules Kiev. Not only because the Poroshenko regime has never kept its promises — but because surrender of the Donbass would mean genocide by the armed fascist paramilitaries against Russian-speaking and other national minority populations in the east, as well as communists and other political opponents of the junta.

The Minsk agreements do not address the internal repressive regime in Ukraine. Rebellious eastern cities like Odessa and Kharkov are patrolled by fascist paramilitaries. Political opponents and journalists are jailed, tortured and killed; communist and anti-fascist symbols are banned. Thousands of political refugees from other parts of Ukraine — today living and working in solidarity with the Donbass — face trumped-up charges not addressed by the proposed “amnesty” law.

As the latest moves by Kiev and Washington show, there is no guarantee the enemy will honor any concessions or treaties that are not backed up by mass struggle, its own armed representatives and international support.