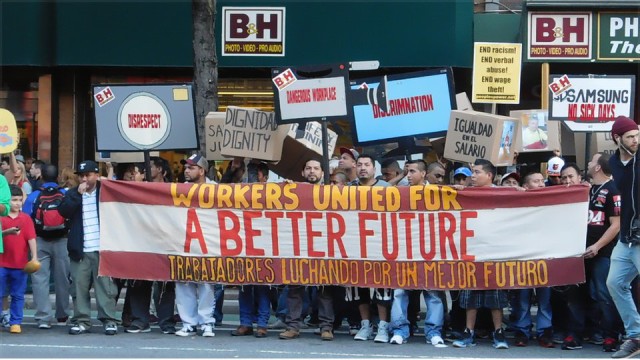 New York — Workers from B&H Photo and their families have launched a union campaign with the worker-led group Laundry Workers Center and the United Steelworkers. They held their first public protest on West 34th Street on Oct. 11.

The demonstration of hundreds of workers and supporters called for this major New York-based photo and video retailer to “fix dangerous workplace conditions, end discrimination against Latino employees, and stop wage theft at their two Brooklyn warehouses,” according to a press release.

“We decided to change the conditions in our workplace. We demand respect and to be treated as human beings,” said Raul Pedraza, a B&H warehouse worker for over six years.

The workers described how at B&H Photo warehouses, supervisors order them to unload or carry extremely heavy loads without sufficient help or safety training. Workers suffer back injuries, the air is filled with dust, and the rooms are hot and dirty, sometimes causing nosebleeds.

According to the release, during a recent fire at one warehouse, workers had to continue working while 50 firefighters and a helicopter gathered outside. Workers say they start at 7:30 a.m., and must stay until management permits them to leave, often as late as 11 p.m. They are also not allowed to “take the meals and rest breaks required by law, nor use their cell phones to reach their families.”

Latino workers complain of being verbally abused and of being paid substantially less than other warehouse employees. A leaflet signed by the Laundry Workers Center and the United Steelworkers called for “a union!” and for the company to “end discrimination, stop verbal abuse” and provide “training, safe working conditions, fair scheduling, respect and dignity” with time for “meals and breaks.” A march from 11th Avenue and 34th Street ended up at the B&H flagship store on 9th Avenue.