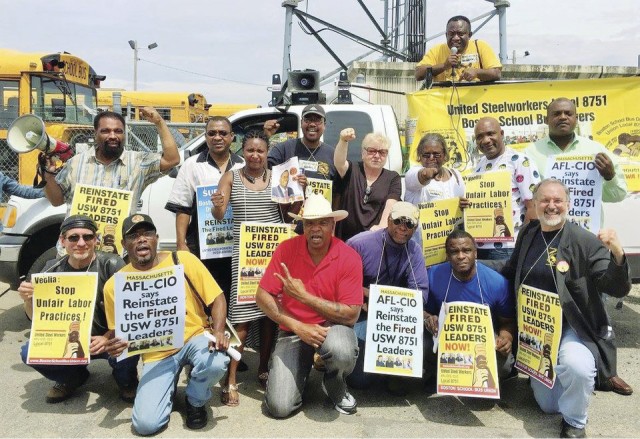 This report is based on a talk given at a Sept. 12, 2015, Workers World Party national leadership meeting.

The past month has brought home the stark reality of how capitalism creates both immigration crises and anti-immigrant racism. Whether it’s imperialist wars, the turbulent fluctuations of capitalist overproduction, the fascist mobilizations in Greece or the anti-immigrant bigotry of Donald Trump, capitalism is a heartless system.

But repression breeds resistance. Bigoted anti-immigrant laws of 2006 brought millions of migrant workers, mostly from Latin America, into the streets in a national one-day walkout that helped to revive May Day in the U.S. In Boston, a union of mostly Haitian and Cape Verdean immigrants has forced the global anti-union giant Veolia/Transdev to sit across the table from that union’s leadership — who are the voice of the fighting rank and file — demanding the reinstatement of four illegally fired leaders, a just contract with no concessions and, for the community, no austerity cuts to education!

What has brought Transdev — formed when Veolia spun off its transit division — to the table is the militant tradition of the Steelworkers Local 8751, the Boston Bus Drivers Union, and the uncompromising class-conscious tactics of the union’s leadership. In particular, that means the credible threat of a strike. That is why Transdev executives flew to Boston to take part in negotiations — not knowing they would have to walk a gauntlet of a hundred union members with placards that said “Bring Back the Four” and “No Contract No Peace.” Many wore strike captain T-shirts with a graphic of a cobra with the words “Will Strike If Provoked.”

The members want their leaders back on the job. In October 2013, the company locked out the workers, who were demanding a meeting with management in response to the company’s total repudiation of the union contract, massive grievances and 16 unfair labor practice charges with the National Labor Relations Board. The city’s current police commissioner, William Evans, enforced the lockout on the ground; the company and mayor then outrageously accused the union of staging a wildcat strike. Boston’s city establishment and media assisted in concocting this lie, through multiple hostile press conferences by then Mayor Thomas Menino, articles attacking the socialist leaders of the union, and a heavy dose of strike-baiting. Within a month, four leaders of the union were fired, all of them elected officers, two of them members of Workers World Party.

Along with the usual anti-union goals of any capitalist city’s ruling class, many in Boston’s establishment were only too eager to crush a union that epitomized militant politically active unionism — a union born out of the Boston desegregation struggles of the 1970s, that has always fought hard for its members as well as the broader interests of its class, and has consistently fought against racism; lesbian, gay, bisexual, transgender and queer oppression; and imperialist war.

If the firings weren’t enough, after a solidarity day rally in June of 2014, Veolia had Vice President Steve Kirschbaum framed up on wild but serious felony charges, including breaking and entering and assault with a dangerous weapon. This company, with a series of union-busting notches in its belt, was confident it could, with the help of the capitalist state, do away with the drivers’ union.

The unity of the rank and file

But as the workers will tell you, Veolia picked the wrong union to mess with. The Team’s strategic orientation is one that has been all but drummed out of the labor movement: they rely on the power of the mobilized rank and file. Every week, there is at least one and often two yard rallies. At a City Council hearing about the firings, 200 drivers showed up and had to be seated in two overflow rooms. The convener of the hearing, Councillor Charles Yancey, said he’d never seen that many people turn out for a hearing before.

At all of Kirschbaum’s court appearances, workers showed up en masse, packing the courtroom and taking over the courthouse with a militant rally. At one court appearance, one of the women leaders of the union made a point of sitting right next to Veolia’s top official. After court, the workers chased the same boss down the street. Probably what saved him from harm was his police escort.

At the March trial, the floor, packed with union members and supporters, looked like a drivers’ break room. The jury saw who was up against who: workers against a powerful company. It took the working-class jurors a fleeting ten minutes to reach a “not guilty” verdict.

Then in April, Team Solidarity swept the union elections by a margin of three to one, with the four fired leaders elected to top positions: Andre Francois as president, Steve Kirschbaum as vice-president, Steve Gillis as financial secretary and Garry Murchison as grievance chair. Now Transdev’s executives are facing an incredibly united union with no significant divisions that they can exploit. The struggle is at a qualitatively different place.

Local 8751 has another weapon at its disposal: Workers World Party. From the first Solidarity Day rally in November of 2013 to the phone banking done from cities around the country; from the call-in mobilizations to the mayor to the many Party members who have gone to Boston and done whatever was needed; from the powerful designs of leaflets, posters and ads and the coverage in Workers World newspaper to getting unions to pass solidarity resolutions; not to mention donations that helped keep the four alive. The Party has been an indispensable part of this struggle.

This struggle is more than a fight between a set of bosses and a set of union workers. It’s being fought at a time of global capitalist crisis and the worldwide austerity that Veolia, which was not the lowest bidder for the school bus contract, was hired to impose. Austerity in Boston includes closing schools and eliminating school bus transportation for seventh and eighth graders. The union has played a central role in opposing these plans to deny educational access and resegregate Boston’s schools.

The union’s example is what drives the political desire of the ruling class to force out the reds. They take note of the fact that Local 8751 members joined the locked-out ATI [Allegheny Technologies Inc.] workers on the picket line and marched and spoke at the Boston Black Trans Lives Matter rally. Communists see every struggle against oppression as integral to the struggle for revolution — and our class enemies know it.

In the 1950s, socialists were purged from the unions, ending anti-racist organizing drives in the South. The union movement was never the same, becoming more insular, each union focused only on the issues of its members and seeing labor-management cooperation as the key to union survival.

The same bourgeois interests backing Donald Trump as a response to Black Lives Matter also want to drive the reds out of Local 8751. But leaders in both the African-American community and the labor movement are ready to support Local 8751 in the event of a strike — when the struggle takes the form of overt class war.

At that point, it will be time to head to Boston and walk the picket line!