Oct. 8 — Following the workers’ rejection of the tentative agreement last week, the United Auto Workers gave notice to Fiat-Chrysler Automobiles on Oct. 6 of a strike deadline if a new tentative agreement was not agreed to by midnight on Oct. 7. Union locals began strike preparations — mounting signs on sticks, posting picket assignments, even calling for mass picketing at one local.

Minutes before the deadline the union announced a new tentative agreement. Details are unknown as of the morning of Oct. 8, but FCA and the UAW leadership can expect stiff opposition if there is no real job security and no process to eliminate two-tier pay. 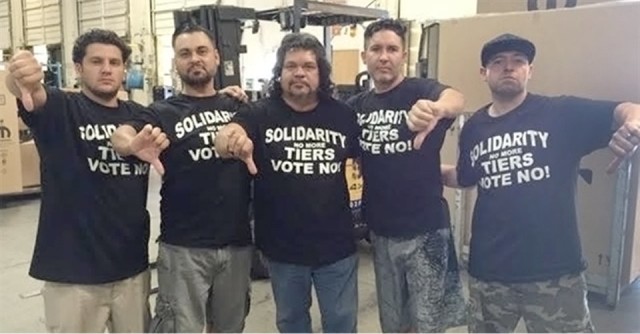 A week earlier, in an act of defiance that caught everyone following the situation off guard, UAW members rejected the earlier four-year tentative agreement between FCA and the UAW by a whopping 2-to-1 margin.

Clearly, both FCA CEO Sergio Marchionne and UAW International President Dennis Williams — who stated that, without question, “they will ratify it” — underestimated the rank and file. In fact, some UAW members underestimated their own co-workers.

Skilled trades workers, higher-paid first-tier production workers and lower-paid second-tier workers did not realize that all three groups would take a unified stand against two-tier pay. Even longtime anti-concessions activists, who developed leaflets to encourage a protest vote, were not anticipating this unprecedented development.

The other remarkable aspect of the struggle was the groundswell of grassroots activism on the shop floor. Workers who opposed the contract became organizers overnight. In some plants, they made message bearing T-shirts. In California, the message read, “Solidarity, No More Tiers, Vote No” and in Toledo the words read, “No Deal.”

In UAW Local 1248, representing parts depot workers in Metro Detroit, a one-on-one educational campaign convinced a wide majority to turn down the contract. Local 1248 was one of the first to vote and set the trend for the rest of the union.

Toledo Jeep workers rallied outside a contract “roll-out” meeting, chanting, “Hell no, Sergio!” and carrying signs against two-tier pay and plans to move work out of Toledo. One sign read, “Vote No to the Culture of Poverty,” a reference to Marchionne’s comment during the 2009 Chrysler bankruptcy that the UAW members had to “get used to a culture of poverty.” Toledo workers rejected the contract by a whopping 87 percent, definitively sinking the concessionary contract.

The Sterling Heights Michigan assembly plant, which stands to gain high volume work if FCA goes ahead with an announced business plan, followed the national pattern roughly of 65 percent against the agreement. Even after the outcome was known, workers at the Warren, Mich., stamping plant and the Belvidere, Ill., assembly plant came out in large numbers to oppose the contract.

This is more than a protest vote. This is a movement.

Issues behind the worker revolt

Workers have a multitude of issues with this contract, but top on their list is that it maintains the unequal two-tier system. The company pays inferior wages and benefits and denies a pension to production workers hired after October 2007. The new contract actually creates more tiers by introducing a lower wage for workers at certain facilities, temporary workers, workers hired under this contract and by lengthening the time needed to reach top pay to eight years. Skilled trades workers hired after October 2011 still get the same wage but not the same benefits.

What has provoked widespread anger is a broken promise to institute a 25 percent cap on the number of “entry level” workers. With 47 percent of FCA production workers being second tier, this cap would have allowed 22 percent of the lower-paid workers to become “traditional” employees. On the front page of the 2011 contract summary, then-UAW Vice President General Holiefield stated that at the end of the contract the cap would kick in.

Thousands of workers, now betrayed, have waited four years to move up. International Vice President Norwood Jewell, who sounds like a company spokesperson, claims the language on the cap was never put into the 2011-15 contract and, if the cap was instituted, the company could not raise pay for all second-tier workers. While Jewell “can’t find” the language, rank-and-filers have found it in the 2009 bankruptcy modifications, knowing that if it was not deleted or modified in 2011, it was automatically carried over. Now that path to the top has been choked off, thus institutionalizing a divisive and unequal system that was supposed to be a temporary measure.

Few workers are buying the either/or argument that the cap had to be eliminated to get everyone a pay raise — not when FCA made $3.8 billion in profit last year and Marchionne paid himself $72 million.

Two-tier — never mind the multiple tiers in this contract — is an affront to union principles and another tool of the bosses to pit workers against one another. This scourge began to appear in the 1980s in the airline and retail industries; now it is widespread.

Typically, when a company’s financial performance is weak, two-tier is presented as an alternative to current workers having to take a pay cut.  Thus, to sell a contract with this provision, union leaders have to appeal to bourgeois individualism — to get the workers to put their narrow self-interest above the interest of future workers.

In 2007, the contract was almost voted down at Chrysler because of opposition to two-tier. Now two-tier is not a hypothetical situation at FCA.

Building a culture of struggle

For years we have been working together, side by side, and it is no longer acceptable that some union sisters and brothers are making substantially less than others. The primary contradiction of capitalism, as Karl Marx recognized, is that while ownership of the means of production is individual, production is social. Workers who are not directly affected by two-tier, including skilled tradespeople who voted “no” overwhelmingly, are joining with the second-tier workers in demanding equal pay for equal work.

The Detroit Free Press pointed out, “UAW negotiators failed to understand the deep hostility of entry-level workers who, instead of taking a substantial raise, chose to join forces with higher-paid veterans to resoundingly defeat a proposed, four-year deal with Fiat Chrysler.” (Oct. 4)

The problem now is not just one of rearranging how the money on the table is spent — Williams has stated he will not take one dollar out of the promised investment — and convincing workers it is a good deal. The bosses and their labor representatives have to deal with an awakened membership that believes union principles of fairness and equality are worth fighting for.

This vote represents an unequivocal repudiation of the labor-corporate “partnership” promoted by the UAW leadership. At the opening of negotiations, Williams and Marchionne were caught in a big bear hug. Now the union leaders have two choices: change course or get out of the way. A new leadership on the shop floor is trashing “the culture of poverty” and embracing a culture of struggle.

Next: The auto contracts and the fight for jobs

Grevatt is a 28-year UAW Chrysler worker who works at Warren Stamping.