Húbert “Huber” Ballesteros is a peasant leader from Fensuagro (National Unitarian Agricultural Trade Union Federation) and the Patriotic March. He is a member of the executive committee of the CUT (Unitary Workers Federation). He is a political prisoner in La Picota Prison in Bogotá, Colombia. In this article he highlights the Colombian regime’s brutal suppression of any form of dissent. 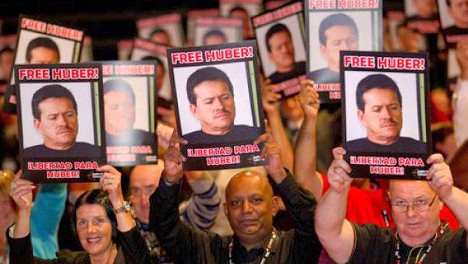 Sept. 15 — The Colombian government has introduced laws and ratified international conventions of the United Nations, the Organisation of American States and the International Labor Organisation.

The commitments made to these multilateral institutions would make one think that in our country the state defends human rights and guarantees the right of workers to organize in a trade union — but the reality is very different.

That thousands of trade union leaders have been assassinated and thousands exiled and imprisoned exposes the systematic repression that the state metes out to any organisation that dares to oppose its policies.

It is in this scenario of repression of the trade union movement that I was arrested on Aug. 25, 2013, on the day I was in Bogotá approaching the government to negotiate the list of demands presented by agricultural organizations, which at the time had been on a national strike since Aug. 19 of that year.

At that point, several comrades active in the strike in regions all over the country had already been assassinated or imprisoned.

From that moment to date, almost 100 members of the Patriotic March have been assassinated and around 300 have been imprisoned.

This is a situation completely incompatible with the Colombian people’s demands for peace and with what has up until now been preliminarily agreed upon between the Colombian government and the FARC-EP insurgency at the negotiating table in Havana, Cuba.

Preliminary agreements have been reached on the land issue, political participation and on finding a solution to the problem of illegal drugs.

How does the Colombian government intend to implement the agreements from Havana on political participation if it continues to persecute and assassinate trade union leaders and activists from the political opposition?

Something which worries us is that the Colombian regime refuses to implement the economic and political changes needed to achieve a sustainable peace.

It is not surprising that the so-called “justice” used in times of war appears to be maintained, even though there is a move towards peace.

This is an inquisition style of justice used as an instrument of repression at the service of the interests of the powerful.

This doesn’t mean to say we are not optimistic about the peace process. On the contrary, we are encouraged by its progress — but we are aware of the dangers it faces.

In my personal case, the prosecution accuses me of the crimes of “rebellion” and “financing terrorism.” This case is based on the paid testimonies of people working for them and uses as “evidence” documents planted by the military intelligence services and police on computers supposedly captured from guerrilla leaders during military operations.

The entire legal process, including the supposed investigation into the charges brought by the prosecution before the judge, has been plagued by irregularities.

Everything has been clearly planned and directed by the executive branch of the government, and the judicial system has been the tool used to punish my trade union activity and public involvement in the political opposition.

We fear that the judge will not take into account all the evidence, which shows that all of this is a vulgar legal setup whose aim was to stop the protest and resistance of peasant communities.

We are facing a legal system that is politicized and that works to impose the state policy of criminalization of social protest.

We also hope that an agreement reached on the issue of justice at the negotiating table in Havana will recognise that social leaders and trade unionists are not insurgents, that social struggle and critical thought are not crimes in a state which presents itself to the world as a democracy.