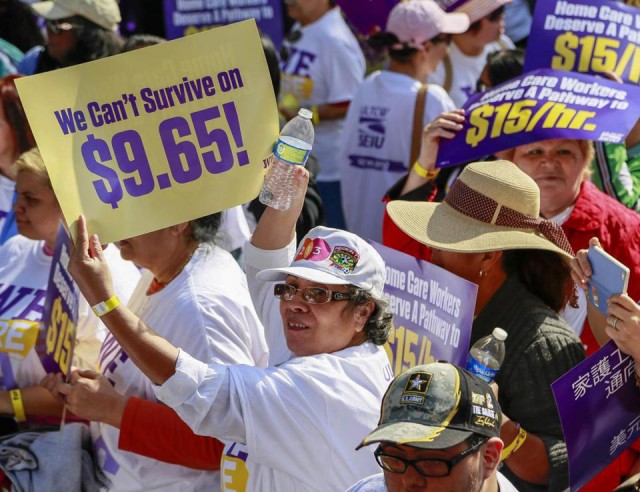 New York Gov. Andrew Cuomo announced Sept. 10 that the Wage Board has recommended the state minimum wage be increased to $15 an hour for all workers. The raise from the current $8.75 minimum wage would be phased in first for 200,000 fast food workers by 2018 and then for all workers by 2021. Thus far, this wage hike, demanded by low-wage fast food workers since 2012, has been adopted in four California cities — Los Angeles, Berkeley, Oakland and San Francisco — and in Seattle. (cnbc.com, Sept. 11) However, this proposal must be passed by the N.Y. state Legislature, which is dominated by conservatives opposed to major wage hikes. And Cuomo, who is rumored to want to run for president in 2020, may have taken this stance to brighten his otherwise dismal record on labor. Stay tuned.

It’s been eight weeks since the contract expired on Aug. 1 for nearly 40,000 Verizon workers, represented by the Communication Workers and International Brotherhood of Electrical Workers, from Maine to Virginia, and “Verigreedy” hasn’t blinked. The union-busting telecommunications company, whose monthly profits are $1 billion, wants to gut job and retirement security and sever all lines of communication between the two unions. During a town hall phone conference on Sept. 15, Vice President Ed Mooney of CWA District 2-13 reported that when the unions presented a study showing the company could achieve $100 million in annual savings in its current health care plan without raising what workers pay, the company dismissed it.

But Mooney also reported that the company is closely monitoring the workers’ defiant fightback actions both on the job and in the streets. For instance, workers are wearing red on Thursday, with some also donning camouflage on Mondays. Locals are also conducting weekly pickets and rallies, like the one demanding that Bianca Cunningham — who helped organize Verizon Wireless workers at six Brooklyn stores to join CWA Local 1109 in 2014 — be rehired after a retaliatory firing in early September (sign a petition to reinstate her at tinyurl.com/psmt59j). Verizon CEO Lowell McAdam was confronted by pickets in front of a New York hotel before addressing a Goldman Sachs conference on Sept. 17. (cwa-union.org, Sept. 17) La lucha continúa.

Support for labor unions is on the rise, according to an Aug. 17 Gallup poll. The nationwide survey found a 5 percent increase in approval of labor unions between 2014 and 2015. After dipping to an all-time-low 48 percent approval rating in 2009, union support began a slow climb, reaching 53 percent in 2014, with a leap to 58 percent in 2015.

The survey found higher union approval ratings among women, at 63 percent, versus men, at 52 percent. In the East and Midwest, the two areas of the country with the highest number of union members, at least two-thirds had favorable opinions of unions. In the South, where only 6 percent of workers have a union, support was the lowest at 45 percent. Respondents aged 18 to 34 were the most likely to approve of unions at 66 percent. (Gallup.com, Aug. 17) As the largely youth-led movement for a $15 minimum wage and union representation — with high participation of women and people of color — continues to gain momentum and win results, the upward trend is likely to continue.

Appeal to unions for Mumia Abu-Jamal

An organizing meeting was called in New York City on Sept. 11 by the Free Mumia Abu-Jamal Coalition (NYC) to mobilize pressure on the state of Pennsylvania to provide immediate lifesaving treatment to cure Abu-Jamal’s active hepatitis C. A resolution demanding such treatment — passed unanimously on Aug. 9 by the Delegate Assembly of the National Writers Union, United Auto Workers Local 1981 — was raised as an example of what should be done. (WW, Aug. 20) After NWU member Sue Davis raised that at a Workers World Party meeting, it was decided that a campaign for unions and other progressive organizations to pass similar resolutions should be initiated. For more information about this campaign, see Millions for Mumia at iacenter. org.