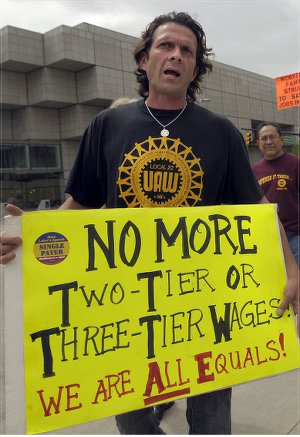 Just 19 hours after the old contract between Fiat Chrysler Automobiles and the United Auto Workers expired on Sept. 14, the company and the union announced that a tentative agreement on a new four-year contract had been reached. Workers began reading the contract online on Sept. 19. The voting process is expected to take about 10 days.

Touting the new agreement, UAW President Dennis Williams told FCA members that “your bargaining committee has taken a thoughtful and strategic approach to addressing this inequity over time in a way that allows the company to continue to invest in our plants, develop new product and keep our jobs secure.” (uaw.org, contract summary)

“This inequity” refers to the hugely unpopular two-tier pay scale. Workers hired after October 2007 are paid substantially less than those hired before that date, have different benefits and do not get a defined benefit pension or health insurance when they retire. The two-tier system not only lowers wages; it keeps workers divided and undermines solidarity.

A cursory read of the contract summary exposes the falseness of Williams’ boastful claims. This is the third UAW-Chrysler contract to perpetuate two-tier. While second-tier workers will see their pay go up, first-tier workers — who haven’t had a raise in nine years — also get a pay increase. By the end of the contract, there will still be a $5-to-$8-per-hour pay gap between the highest paid and the lowest paid workers, most of whom will not even reach the top of their pay scale.

There is an even lower hourly rate for parts workers and axle plant workers, as well as the often-abused temporary part-time workers for whom most of the contract, including the grievance procedure, does not apply. In fact, there are more pay tiers than before. The unequal benefit structure is basically intact. A promise under the old contract to move a percentage of workers up to first-tier pay is broken in the new contract.

Far from “addressing” this gross inequality, the contract institutionalizes it “over time” — until first-tier pay and benefits disappear as older workers retire or die. Until then, FCA’s plan is to maintain two-tier pay in perpetuity. This scheme has precedence. After breaking a long strike in 1998, Caterpillar became the first UAW employer to introduce two-tier wages. Now there is only one low tier.

There are other drawbacks to the contract — no raises in pensions, no restoration of the cost-of-living allowance, a rotten attendance policy, further consolidation of skilled trades classifications and the continuation of the hated Alternative Work Schedule.

While workers are disappointed and angry about the continuation of two-­tier, they are even more concerned about layoffs under a major $5.3 billion “investment” plan — read restructuring. Right after the tentative agreement was announced, the news broke that FCA would be moving all car production to Mexico. UAW plants in the U.S. will now only produce trucks and SUVs, with the production spread around FCA’s five assembly plants.

The original justification for two-tier, introduced in the 2007 contract, was that it was necessary to help Chrysler, Ford and General Motors overcome financial difficulties. Later, when they began making record profits, workers were told that lower labor costs would bring small car production back to the U.S. Now it is clear that this was a capitalist ploy to drive wages down in order to jack up profits.

Ford is moving Focus production out of the country. GM’s small car plant in Lake Orion, Mich., has hundreds of workers on indefinite layoff. Now FCA is moving car production — where the profit margin is lowest — back to a country where workers earn about one-fifth the wages of U.S. autoworkers. Trucks and SUVs, which are the most profitable, will be built in the U.S. where wages are higher, but now substantially reduced. Many plants will see their workloads reduced.

This is how FCA CEO Sergio Marchionne gets his reputation as a “turnaround kid.” As CEO of Fiat — before Fiat took over Chrysler and merged the two companies — he would bully Italian autoworkers into taking concessions under the threat of plant closings. Taking advantage of the restoration of capitalism, Fiat built plants in Eastern Europe, where workers make far less than their Italian counterparts. As the Mexican FCA plant makes space to manufacture the Dart and 200, production of the Fiat 500 is moving to Poland.

The massive retooling involved in moving all the manufacture of these vehicles to different plants will cost billions of dollars that could be used to eliminate unequal wage tiers worldwide. This restructuring will bring in the latest, greatest, leanest and meanest of labor-saving, job-cutting robotics. This hardly sounds like a plan to keep jobs secure — not in the U.S., Mexico or Poland.

The only thing that will keep jobs secure is to follow the example of GM, Ford, Volkswagen and Mercedes workers in Brazil, who went on strike and stopped permanent mass layoffs from happening this summer.