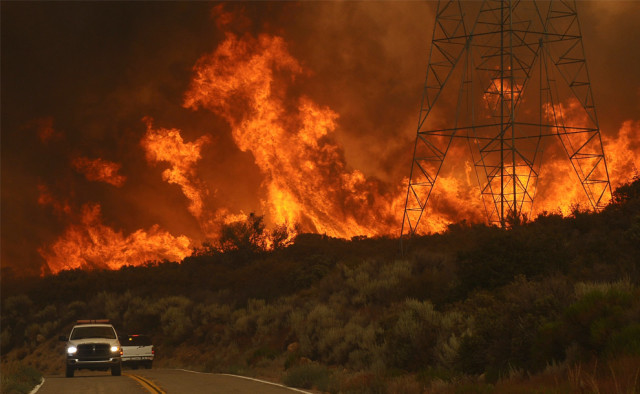 Sept. 20 — Five people have been killed by ferocious wildfires sweeping through California, including a disabled woman burned to death when she could not escape her home on Sept. 12. More than 1,000 homes have been destroyed as of Sept. 20, with thousands more still threatened. More than 23,000 people have fled their homes. Other western states, including Washington, Oregon, Idaho and particularly Alaska, have seen a huge spike in wildfires this year.

As of July, some 5 million acres of Alaska’s forests, more than the size of the state of Connecticut, burned in hundreds of wildfires. Scientists warn that these fires could melt huge areas of permafrost, which covers 80 percent of the state. In turn, this could release millions and millions of tons of carbon emissions from methane into the atmosphere, greatly accelerating global warming. (“Alaska’s terrifying wildfire season and what it says about climate change,” washingtonpost.com, July 26)

Ironically, the current worldwide glut of oil caused by capitalist overproduction has resulted in a decline in fuel prices. Alaska’s government, which depends on tax revenue from the same big oil companies that have caused global warming, now has less money to spend fighting these fires.

More than 4,000 prisoners, nearly half the 10,000 firefighters involved, are fighting the blazes in California. The work is incredibly hard and dangerous. Prisoners cut fire lines in steep areas that bulldozers can’t reach, stripping away brush and trees to expose soil that won’t burn. For doing this work next to flames that shoot 100 feet into the air, they are paid a paltry $1 an hour. While being trained, they get about $2 a day. (thinkprogress.org, Aug. 13)

Courts have ruled that California must greatly reduce the number of inmates in its prisons. The harsh conditions of these overcrowded and segregated jails have forced many prisoners to “volunteer” for fire duty. But since California saves so much money from this slave labor — up to $1 billion per year — its lawyers actually filed documents late last year saying that state parole programs for released prisoners would “severely impact fire camp participation — a dangerous outcome while California is in the middle of a difficult fire season and severe drought.”

Increase in wildfires traced to drive for Wall Street profits

Wildfires have always burned in the western part of the country. But scientists have noted a huge increase in their number and strength. “Wildfires in the western United States have been increasing in frequency and duration since the mid-1980s, occurring nearly four times more often, burning more than six times the land area and lasting almost five times as long (comparisons are between 1970-1986 and 1986-2003),” says the Union of Concerned Scientists.

The group adds that “wildfire seasons (seasons with higher wildfire potential) in the United States are projected to lengthen, with the southwest’s season of fire potential lengthening from seven months to all year long. Additionally, wildfires themselves are likely to be more severe.

“The risk to property owners at the ‘wildland-urban interface’ in California (more than 5 million homes in southern coastal California, the Bay Area, and north of Sacramento) is projected to increase with the increase in wildfires near these areas.

“The environmental and health costs of wildfires are also considerable; not only do wildfires threaten lives directly, but they have the potential to increase local air pollution — exacerbating lung diseases and causing breathing difficulties even in healthy individuals.”

Yes, each wildfire is a “natural” disaster. But, clearly, the huge increase in the number and intensity of these fires can be traced right back to Big Oil, to Big Coal, to hydraulic fracturing and, of course, to Wall Street’s insatiable drive for profits. They are the root cause of each catastrophic effect of global warming.

The only way to reduce the “human” cause of global warming is to create the technologies that allow us to leave the coal, oil and natural gas in the ground. What stands in the way of doing that are the giant corporations and banks, the billionaires from Warren Buffet to, yes, Donald Trump, who stand to lose trillions of dollars in profits from such a shift.