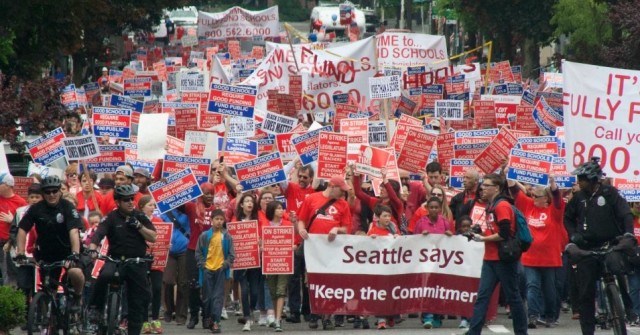 Seattle teachers and staff suspended their 7-day strike against the Seattle School District on Sept. 15. The strike, with an amazing amount of activity, greatly increased the bonds of solidarity between the teachers and the community, especially with parents and students.

After a tentative agreement was reached between the Seattle Education Association and the Seattle School District on Sept. 15, SEA’s Representative Assembly voted to suspend the strike. Teachers and staff returned to work on Sept. 16, and schools opened the next day. The SEA membership approved a 3-year contract, with a big ratification turnout from the union’s 5,000 members on Sept. 20.

Parents and supporters sang at a rally outside the hall where the vote took place. They were giving support to the educators whichever way they voted.

Given all the cutbacks and attacks on public education that had taken place, the teachers were demanding better conditions for the students, while insisting on fairness for themselves. The teachers were fed up with overwork and being disrespected by administrators, politicians and anti-public-education “philanthropists.”

A very inclusive 40-member bargaining team negotiated throughout the summer. The SEA called for a pay increase for educators, since their tiny salary increases had been eaten up by higher medical costs in the last contract. They also wanted more help for support staff. Teachers opposed the short 15-minute recesses for students and a longer school day. They wanted “race and equity teams” in the schools to combat systemic racism.

Picketing teachers were highly visible throughout the strike, with dozens demonstrating and chanting at each of the city’s 97 public schools. They were supported by parents’ groups, such as Soup for Teachers, which brought food and support to the picket lines. While educators wearing red shirts were all around the city, it appeared that school district and school board representatives were in “bunker mode.”

On Sept. 14, hundreds of teachers held a mass picket line at Franklin High School. About 100 teachers marched five-and-a-half miles from Chief Sealth International High School to school district headquarters. There were other convergence actions across the city.

Also that day, the Seattle City Council, feeling the pressure, voted unanimously to support the strike. Labor unions from across the country sent support messages to the strikers. It was then that the school district moved to settle with the SEA, making some concessions.

Some 800 parents and young students marched on John Stanford District Headquarters on Sept. 15 to support the teachers’ demands. After many parents made “mic check” teacher-support statements, the tentative agreement was announced.

While there were many gains in teacher and community solidarity, here are some of the settlement’s concrete results: The SEA won a guaranteed 30-minute recess for students; a 4.8 percent cost-of-living increase in the first two years, a 5 percent pay increase over two years, with a 4.5 percent increase in the third year. The school day will be lengthened by 20 minutes.  The SEA website says the teachers will be compensated for additional time and that more staff will be added to help the educators and students.

The SEA forced the district to uncouple student test scores from teacher evaluations. “Race and equity” teams will be set up to deal with racial disparities in education in 30 schools; this is a gain, but it is not sufficient.

The teachers’ struggle can be built on. Seattle Educators Association President Jonathan Knapp said they followed the lessons of the 2012 Chicago teachers’ strike in unifying with the community. One advance was an alliance with at least three new parent groups. Black Lives Matter and  NAACP activists strongly supported the strike.

This strike also grew out of a wave of dozens of one-day strikes by teachers across Washington state during the spring. These walkouts opposed the state Legislature, which has refused to allocate necessary funding for basic education for all students. The struggle for a decent education will continue because youth are too precious to be sent to prison or in other ways abused by the capitalist class.