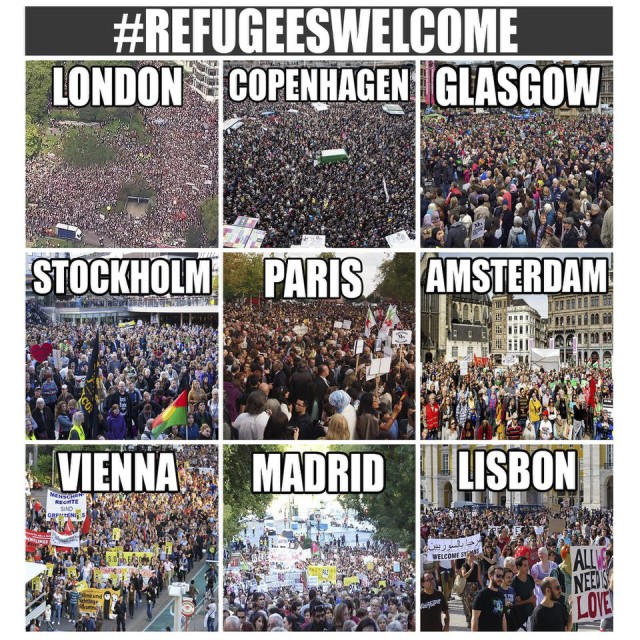 A European “Day of Action” in solidarity with refugees from the Middle East and Northern Africa who are entering Europe took place on Sept. 12 in a number of capital cities on the continent and even as far away as Sydney, Australia.

The huge outpouring of tens of thousands of migrant supporters countered the corporate media’s focus on right-wing hostility to the refugees in some countries. Many protesters asserted opposition to their government’s plans to limit the number of refugees who would be admitted into their country.

The point was stressed at several countries’ rallies that the migrants are fleeing their homelands besieged by wars — wars in which their own governments are complicit. Activists insist that their governments have a responsibility to open the borders, welcome all migrants and provide essential services to them, especially those from Syria, who have fled their homes after four years of imperialist-led war and dislocation.

In a “Solidarity with Refugees” action, tens of thousands marched in London to Prime Minister David Cameron’s office. Holding signs reading “Open the Borders,” “Shut down all detention centers now!” and “Refugees in, Tories out!” they aimed their demands at government leaders, calling on them to do much more to help the migrants. A few days before the demonstration, Cameron said that Britain would take in 20,000 more refugees, but over five years — hardly adequate, given the severity of the crisis, and unacceptable to the demonstrators.

Some 30,000 people assembled outside Denmark’s parliament building in Copenhagen and protested their government’s proclamation that it would severely limit the number of migrants who would be allowed to enter the country.

In other cities, various slogans were chanted and written on placards, such as “Welcome Syrians” in Lisbon, “Deportations for racists” in Athens, “Down with Europe’s walls” in Stockholm and “Berlin sees Syria” at that city’s rally at Potsdamer Platz.

It is noteworthy that some demonstrations were held in Eastern European countries where governments and ultra-right groups have exhibited anti-migrant hostility. Activists protested the Hungarian government’s mistreatment of Syrian refugees by rallying at Keleti train station, where migrants have assembled in their attempts to reach other European countries. Demonstrators loudly chanted “Not in my name!” and showed strong solidarity with migrants.