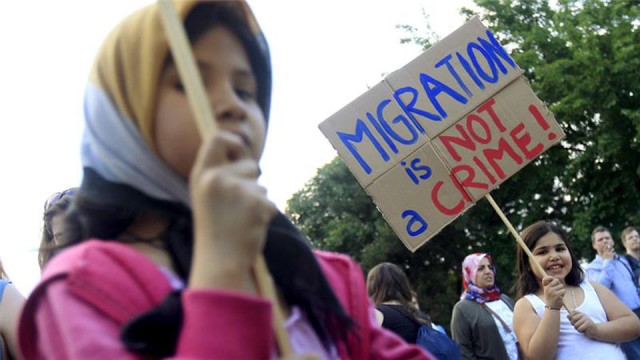 Sept. 14 — Wars Washington initiated aimed at reshaping the political landscape of large regions of Africa, the Middle East and Asia are continuing and creating an enormous refugee crisis. Bombing operations by the Pentagon in Iraq and Syria are displacing hundreds of thousands of people every month and are now spreading the crisis to Europe.

In response to this growing surge of refugees, Hungarian officials have again threatened migrants from the Middle East, Africa and Asia with imprisonment if they continue to cross Hungary’s borders or resist repressive treatment.

The regime in Budapest says it completed a fence across its border with Serbia to halt the flow of migrants into the country. Hungarian officials also indicated they would prevent migrants from entering on trains.

The U.N. High Commissioner for Refugees reported that Budapest was shipping thousands of migrants and refugees to Hungary’s border with Austria on special trains, making it appear that they will no longer register them.

Refugees herded into makeshift detention areas face overcrowding, a lack of food, constant police harassment and brutality. A Sept. 11 BBC article noted, “Footage has emerged of migrants being thrown bags of food at a Hungarian camp near the border with Serbia. An Austrian woman who shot the video said the migrants were being treated like animals.”

Nonetheless, Hungarian Prime Minister Viktor Orban lauded the police for their actions against what he called “rebellious migrants” and threatened to take more repressive measures. His country has been one of the most openly vicious and racist in blocking migrants’ passage through European Union countries. This passage is supposed to be guaranteed by a treaty member-states signed several years ago.

These developments were taking place while EU interior ministers were holding an emergency meeting in Brussels on Sept. 14 in an effort to coordinate their policy for processing and integrating the migrants. In response to the influx of hundreds of thousands of people from the Middle East, Africa and Asia, various governments have imposed travel restrictions, including Austria, Slovakia and the Netherlands.

The German government of Chancellor Angela Merkel also announced that it would put checks on its border with Austria. This tightening of the borders came following weeks of pronouncements from Germany that appeared to welcome migrants.

On Sept. 13, officials in Berlin said that if the flow of migrants was not stopped, there would be no place for people to live and they would be sleeping in the streets.

Temporary housing for migrants is planned at a large transportation facility built during the 1930s. The Telegraph wrote, “Berlin’s famous Nazi-era Tempelhof airport is to become a refugee shelter. The airport, which has been out of service since 2008, will house up to 1,200 refugees in two former hangars, the Berlin state government has announced.” (Sept. 14)

On Sept. 14, German Interior Minister Thomas de Maiziere said, “The focus will initially lie on the border with Austria. The goal of this measure is to restrict the present inflow of migrants into Germany.” (CNN)

The German government said it was stopping train transport to and from Austria for thirteen hours on Sept. 13, according to a tweet sent out by the Austrian Federal Railways. Halting train traffic between the two countries extended from 5 p.m. on Sept. 13 to the next morning at 6 a.m.

Spokespeople for the Austrian police reported that 7,000 people had crossed the border from Hungary on Sept. 14. On the previous day some 14,000 entered the country.

Austrian government leaders said military personnel were sent to the entry and gathering points and that “If Germany carries out border controls Austria must put strengthened border controls in place.” (BBC, Sept. 14)

EU and U.S. fail to address causes of crisis

Meanwhile, the political and security crisis in Syria, Iraq, Libya, Lebanon, Yemen, Nigeria, Afghanistan, Turkey and other states are creating the conditions for further dislocation. Rather than dealing with the root causes of the crisis, the U.S. and EU states are instead arguing about how few refugees to take into their countries.

Some EU leaders have rejected any quotas of refugees as proposed by Germany and France. This rejection creates logistical challenges in the transport of migrants to states where the official position is to accept migrants for resettlement.

President Barack Obama’s administration issued a Sept. 11 statement that the U.S. would allow 10,000 Syrians to enter the country. This is only a small fragment of those forced to leave Syria and other states on two continents due to Washington and Wall Street’s foreign policies.

British Prime Minister David Cameron visited a refugee camp in Lebanon on Sept. 13 and said his government would open its borders to 20,000 displaced persons. Successive governments in London have supported U.S. military interventions in various states, including Afghanistan, Iraq, Syria and Libya, among others.

Resistance among migrants to repression in Hungary indicates that the EU is unprepared to integrate what may be millions of new residents. Hungary has said that they want to keep people out to preserve their European “Christian heritage.”

Wars funded, coordinated and given diplomatic cover by U.S. imperialism in Yemen, Libya, Egypt and elsewhere are worsening the plight of tens of millions. U.N. and other humanitarian agencies are incapable of meeting the needs of refugees and migrants under conditions of armed factional struggles and the total breakdown of state structures involving transportation, food distribution, fuel supplies, medical services and education.

The current situation involves the massive deaths in the Mediterranean of those seeking refuge in Europe. This and the social restrictions and racist repression they will be subjected to in the EU member-states warrants a response from the anti-war and social justice movements in both Western Europe and North America. With an economic crisis still prevalent in several European countries, the harsh situation of the migrants can provide a basis for an alliance between the workers and oppressed living in Europe and those streaming in as a direct result of the imperialist policies of the U.S. and NATO.