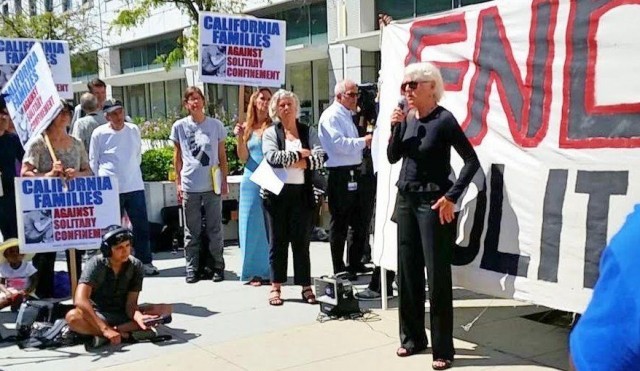 Oakland, Calif. — The Prisoner Hunger Strike Solidarity Coalition (PHSSC) held a press conference Sept. 1 to announce that a historic agreement had been reached in the Ashker v. Brown (Gov. Jerry Brown of California) federal class action suit, representing California prisoners, where the state of California has agreed to end long-term solitary confinement, among other concessions.

“This settlement represents a monumental victory for prisoners and an important step toward our goal of ending solitary confinement in California, and across the country. California’s agreement to abandon indeterminate SHU confinement based on gang affiliation demonstrates the power of unity and collective action. This victory was achieved by the efforts of people in prison, their families and loved ones, lawyers, and outside supporters. Our movement rests on a foundation of unity: our (2012) Agreement to End Hostilities. It is our hope that this groundbreaking agreement to end the violence between the various ethnic groups in California prisons will inspire not only state prisoners, but also jail detainees, county prisoners and our communities on the street, to oppose ethnic and racial violence. From this foundation, the prisoners’ human rights movement is awakening the conscience of the nation to recognize that we are fellow human beings. As the recent statements of President Obama and of [Supreme Court] Justice [Anthony] Kennedy illustrate, the nation is turning against solitary confinement. We celebrate this victory while, at the same time, we recognize that achieving our goal of fundamentally transforming the criminal justice system and stopping the practice of warehousing people in prison will be a protracted struggle. We are fully committed to that effort.”

When Ashker v. Brown was filed in 2012, there were thousands of prisoners held in solitary confinement SHU units in California. According to the Center for Constitutional Rights (CCR), as of Aug. 31, a total of 2,858 prisoners were in solitary housing units throughout the state. More than 1,100 were in Pelican Bay, the state’s toughest prison, where the isolation cells don’t even have windows.

According to the CCR’s website, “This landmark settlement will effectively end indeterminate, long-term solitary confinement in California state prisons, fundamentally altering all aspects of this cruel and unconstitutional regime. Ultimately, it is the result not merely of litigation, but of a widespread community effort led by prisoners and their families.”

“From the historic prisoner-led hunger strikes of 2011 and 2013, to the work of families, loved ones and advocates, this settlement is a direct result of our grassroots organizing, both inside and outside the prison walls,” said Dolores Canales of California Families Against Solitary Confinement (CFASC), and mother of a prisoner in Pelican Bay. “This legal victory is huge, but is not the end of our fight — it will only make the struggle against solitary and imprisonment everywhere stronger.” (ccrjustice.org, Sept 1)

The PHSSC press release points out, “The prisoners embarked on two hunger strikes in 2011 and another in 2013 that became the largest prisoner hunger strike in history, with over 30,000 prisoners across California and the country refusing food. In 2012, they filed this lawsuit against the California Department of Corrections and Rehabilitation. Their struggle is a long-standing struggle to abolish a torturous practice that was instated to repress and attack the powerful prisoner-led movement in the 1960’s and 70’s.

“The settlement changes California’s use of solitary confinement by limiting the use of punitive isolation to only cases where there has been a substantiated serious violation of ‘behavior.’ The prison system can no longer send people to the SHU because of accusations of gang affiliation or their political ideas and interests, which currently account for why many are inside solitary.

“The settlement was negotiated with the active participation of prisoner representatives, who will continue to participate formally, along with their attorneys and the magistrate judge, to monitor implementation of the terms of the agreement.”

The PHSSC says: “It is estimated that between 1,500 and 2,000 prisoners will be released from SHU within one year of this settlement. A higher security general population unit will be created for a small number of cases where people have been in SHU for more than 10 years and have a recent serious rule violation.”

The effects of this settlement on the prison population are truly significant. Hundreds of these prisoners had been isolated for decades, according to the CCR’s website. “They spent nearly 24 hours per day in cramped cells, often without windows, and were denied phone calls, all physical contact with visitors, and recreational, educational, and vocational programming.

“Under the system challenged in the lawsuit, prisoners validated as gang affiliates used to face indefinite SHU confinement, with a review for possible release to general population only once every six years, at which even a single piece of evidence of alleged continued gang affiliation led to another six years of solitary confinement. That evidence was often as problematic as the original evidence used to send them to SHU — for example, a book, a poem or a tattoo that was deemed to be gang-related.”

Under the settlement: “After serving a determinate sentence for a SHU offense, prisoners whose offense is related to gang activity will enter a two-year, four-step, step-down program to return to the general prisoner population. Prisoners will receive increased privileges at each step.

“California will review all current gang-validated SHU prisoners within one year of the settlement to determine whether they should be released from solitary under the settlement terms. The vast majority of such prisoners are expected to be released. Virtually no prisoner will ever be held in SHU for more than 10 continuous years.”

Anne Weills, one of the dedicated lawyers, who has spent countless hours working on this suit, including many trips up to Pelican Bay, said at the press conference, “We wouldn’t be here if not for the leadership of our prisoner clients. All honor to the jailhouse lawyers, who were the leaders and strategists of this struggle.”