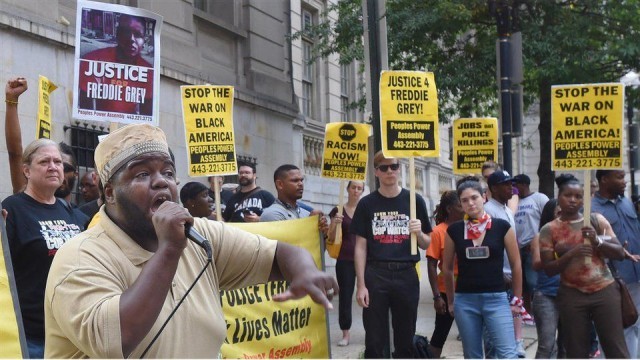 About 100 protesters rallied outside the Clarence Mitchell Courthouse in Baltimore on Sept. 2 in a protest to demand justice for Freddie Gray, a 25-year-old Black man who died in the custody of Baltimore cops on April 19.  The protest was called by the Baltimore People’s Power Assembly.

April 2 marked the first pretrial hearing in the case of the six police officers charged in Gray’s death. Three major defense motions were being decided upon. The first was that State’s Attorney Marilyn Mosby, who was elected to her position, be dismissed from the case. The second was that the charges be dismissed against the officers who killed Gray, and the third was that the cops be tried separately.

The protesters gathered at 8 a.m., to coincide with the start of the hearing.  Many people shared their testimonies of living in fear of being brutalized by the police.

After the rally, a group of about 50 protesters marched downtown and blocked a major intersection.  As they linked arms across the street and began to face off with the police, one protester, Kwame Rose, was attacked by police.

Rose had fallen behind and then been hit by a car, which some said was a police vehicle. He was handcuffed and held down by four officers, even though witnesses say he was not resisting in any way and had been injured by the car that hit him.  As he lay on the street handcuffed, police held a Taser to his back and repeatedly screamed, “Do you want to get Tased? Is that what you want?”

Rose yelled for medical attention and received none.  Instead, he was dragged into a police van, and it wasn’t until the protesters demanded multiple times for the police to allow him medical attention that an ambulance arrived.  He was taken away in an ambulance and was later transferred to Baltimore’s Central Booking, where he was released on bail later that night.

At 6:30 p.m., protesters gathered again at the courthouse for a rally led by the family of Tyrone West, who had been beaten to death by Baltimore cops in 2013. His family is still seeking justice, two years later.

The speakers testified about the violence they had faced at the hands of the police; demanded justice for Freddie Gray, Tyrone West and all victims of police brutality; and included some poetry and creative expression.

David Card of “Fight Imperialism, Stand Together” said, “The only reason that the six officers were indicted was because of the power of the people in the streets, and the only thing that will see them convicted and jailed is if we continue to stay in the streets and fight for justice.”

These were small but important victories and a step forward in what will be a long and arduous struggle for justice for Freddie Gray and all victims of police brutality.