Friends and supporters of Nicaraguan citizen Bernardo Tercero rallied outside of the Nicaraguan Consulate on July 9, to encourage the consul general to intensify efforts to stop Tercero’s August 26 execution in Huntsville, Texas. “We are here to urge the Honorable Samuel Trejos, consul general of Nicaragua in Houston, to step up and defend his fellow countryman, Bernardo Tercero, before any more injustices take place,” said Tercero’s friend Luz Alvarez. 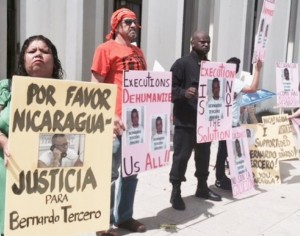 The activists raised with the media the many troubling issues in Tercero’s case that must be settled before Texas carries out this execution. Media coverage was extensive, including a TV station from Nicaragua as well as local Houston stations and La Semana and the Houston Chronicle newspapers.

Even though Tercero specifically requested to speak with the Nicaraguan Consulate and the authorities had full knowledge of Tercero’s status as a foreign national, they denied him his right, which he has under the Vienna Convention of Consular Relations (VCCR, Article 36).  Also, Tercero was only 17 years old when arrested for capital murder. With this age at the time of the crime, he cannot be executed, according to the Supreme Court’s Roper v. Simmons ruling in 2005, which declared juveniles ineligible for the death penalty.

Tercero had totally incompetent trial attorneys. Rather than use the funding provided by the court to have a knowledgeable professional assist in obtaining records and conducting background and mitigation investigations in Nicaragua, attorneys instead refunded almost half of the funds to Harris County.

Although the trial court approved Tercero’s counsel’s request for a forensic psychologist in February of 2000, counsel did not attempt to contact a psychologist until Sept. 29, 2000, less than two weeks before Tercero’s trial was set to begin. No psychological testing was ever done, nor was any psychological or other expert evidence, records or testimony offered at trial.

British attorney Peter Bellamy and Tercero petitioned the Inter-American Commission on Human Rights to intervene in this case.  Bellamy was notified on July 6 that the IACHR accepted the petition on its merits and will investigate the case. The IACHR has renewed the “protective measures” status of Bernardo, which imposes responsibilities on U.S. authorities not to carry out the execution pending the outcome of the commission’s investigation of Bernardo’s petition.

There have been multiple systemic failures in Tercero’s case, beginning with his arrest and continuing today, namely a lack of due process at every stage of prosecution, defense and post trial appeal. Until there is a remedy to these, Bernardo’s sentence must not be carried out.

In the death row visiting area the day after the rally,Tercero told this reporter to convey his gratitude to everyone who is working to help him  stop the August execution and bring justice to his case.
As of July 13, Texas had executed 527 people since reinstatement of the death penalty in 1976, nine of them already this year with nine others scheduled, including Tercero. Another foreign national facing execution, Gilmar Guevara, a citizen of El Salvador, was also denied his consular rights under international law.