The following article was written last March 4, shortly after the anti-austerity electoral victory of Syriza. The hostile reaction of European finance capital was out in the open. And the German bankers played the leading role in putting up a stone wall against the early anti-austerity program of Syriza.

While many Keynesian bourgeois economists and a variety of  political figures at the time expressed dismay at the attitude of Berlin (as they are doing now), the European finance ministers disregarded all warnings and went ahead to impose a third and devastating memorandum on the Greek masses despite a 25 percent economic contraction (a “Great Depression”) and massive unemployment.

The article below attempts to put the reaction of German imperialism in historical perspective — viewing the German industrial-finance complex as it burst on the scene at the end of the 19th century and then precipitated two interimperialist wars in the 20th century.

This exposition is more relevant today than when it was written, given the third austerity regime being imposed on Greece now. The new austerity program against the Greek workers has the backing of the U.S., French,  and other ruling classes throughout Europe despite their differences with the German bloc of countries over debt relief.

The special role of German finance capital must be understood in objective, Marxist, class terms as it has developed within the framework of world imperialism. — Fred Goldstein, July 17. 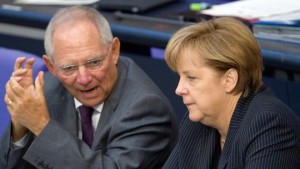 March 4 — For five years the European Central Bank, dominated by German finance capital, has engineered bailouts and imposed austerity on Greece, Spain, Portugal, Ireland and Italy. And for five years various establishment economists, politicians and pundits in the U.S. like Paul Krugman and James Galbraith have been frustrated and perplexed.

Their complaint? Capitalist Europe is in an economic crisis. Austerity will make the crisis worse. Why don’t the German bankers and the ECB listen to reason? Why pursue such a destructive policy, which harms the economy and causes untold mass suffering?

They cannot understand why German Finance Minister Wolfgang Schäubel and Chancellor Angela Merkel are ruthlessly inflexible, taking a hard line with Greece, despite Greece’s being in its own Great Depression.

The answer to this question can be found in the nature of finance capital itself. Bankers are bankers, whether they are German, French, Dutch, Italian, U.S. or Japanese. They live on parasitical interest payments. They will stop at nothing to extract every last nickel from the masses.

The destruction of wages, benefits and social services throughout the bailed-out countries of Europe, regardless of the human and economic consequences, in order to collect debts incurred by capitalist governments shows that finance capital knows no morality except parasitic profit gouging.

But within the general framework of financial aggression, the expansionist nature of German capitalism and imperialism occupies a special place — as does U.S. finance capital, the number one militarist and imperialist power in the world today.

In World War II Hitler tried to subjugate Europe, as well as the Soviet Union, the Middle East and North Africa. The German ruling class got behind the Nazis because Hitler had a program of making the German bosses the rulers of a vast empire. This expansion was called “Lebensraum” — room for German capitalism to live in.

Hitler’s war drive was a continuation of the German imperialists’ struggle for “a place in the sun,” as German Foreign Minister Bernhard von Bulow put it in an 1897 debate that eventually precipitated World War I.

A “place in the sun” for Germany by 1914 was the “sun” of colonial empire. The British and the French had the lion’s share of colonies conquered during the 19th century in Africa, East Asia, South Asia and the Middle East. German capitalism came late on the scene as a developed industrial country. But by 1900 it had surpassed Britain’s productive force, having the strongest industrial base in Europe. It had a developed scientific-technological establishment behind its industry and at the service of its military.

It had all the prerequisites for becoming a premier imperialist power.

But despite all its industrial and military potential, it had relatively few colonies. Colonies were the key to exporting capital — to grabbing natural resources, cheap labor, big profits and imperialist power.

The German ruling class wanted to reverse its situation by ripping the colonies from England and France through military force, as well as by absorbing Eastern European countries, subjugating Russia and seizing industrial areas in Belgium. Of course, British and French imperialists were determined to sacrifice their own working-class youth to keep ownership of their colonial possessions.

Germany, and its allies in Ottoman Turkey and Austria-Hungary, were defeated in World War I, with the help of the intervention of U.S. imperialist troops at the end of the war. The German imperialists lost what few colonies they had — Tanganyika (Tanzania), Southwest Africa (Namibia), Cameroon and other smaller territories. These colonies all went to the victorious robbers, British and French colonialists.

German capitalism was disarmed by its imperialist rivals after the war. Following this defeat and 15 years of intense class struggle in Germany, Hitler and his Nazi Party won over the German ruling class by showing they could smash working-class organizations. They got the go-ahead to establish a fascist regime, subdue the working class and rearm Germany to try again for world conquest. This set the stage for World War II.

Nazi Germany was thoroughly and definitely defeated militarily in World War II, mainly by the Soviet Red Army, which repelled and destroyed over 200 Nazi divisions, while the USSR suffered 20 to 25 million killed. In the aftermath of the war, Washington, Wall Street and the Pentagon became the masters of world imperialism. German capitalism was disarmed but allowed to revive economically as a partner in the Cold War.

Germany became a forward base for the Pentagon and NATO in the struggle against the USSR and the socialist camp. West Germany also became a showcase for Western capitalism in the struggle with the German Democratic Republic (East Germany) and other socialist countries in eastern Europe.

During WW II German imperialism invaded the rest of Europe with tank divisions and fast-moving massive ground troops, backed up by its air force and V-2 rockets. Today German capitalism is trying to subdue Europe, especially southern Europe, with debt collectors. The Frankfurt banks, the Bundesbank (German Federal Bank) and the European Central Bank, all dominated by German bankers, are holding Greece, Portugal, Spain, Italy and Ireland in debt bondage engineered during a series of government and bank bailouts beginning in 2010.

German finance capital is struggling to dominate Europe through the use of the euro, the common currency used in 19 eurozone countries. The euro was supposed to be a competitive reply to the dollar. It was supposed to give economic weight to Europe as against Wall Street. And to some extent it has.

But the German ruling class was the architect of the eurozone. Putting the eurozone countries on a currency controlled from Germany’s financial center in Frankfurt was a formula for future domination by Berlin, Germany’s political capital. As the strongest financial and industrial power on the continent, it was inevitable that German finance capital would gain a stranglehold over much of Europe, especially the weaker capitalist economic powers. These weaker powers effectively gave up a large part of their sovereignty, having lost control over their currencies and their ability to self-finance.

The European Central Bank is controlled financially and politically by its largest contributors. Germany has the largest contribution, France is right behind Germany and the rest of Europe is far behind. So German bankers dominate the ECB, the euro and the eurozone economically.

German capitalism has not changed its nature

The nature of German capitalism, although it has been militarily disarmed since the two world wars, has not changed its need to expand. It has the strongest industrial-technological base in Europe. It has the most advanced capitalist economy. And it has never ceased to look for its “place in the sun.”

In addition to lauding it over the weaker imperialist countries in western and southern Europe, Germany has expanded since the 1989-1991 collapse of the USSR into the neocolonial central and eastern European countries with investments, exports and outsourcing to take advantage of drastically lower wages in Poland, Czech Republic, Hungary and so forth. In this sphere, it is in competition with U.S.-Anglo capitalism.

In its struggle to be “competitive” and invade southern Europe with its commodities, investments and finances, the so-called “miracle” of the German ruling class has been to lower wages at home.

The stereotypical view of Germany is that of a prosperous country with high wages. This is because during the struggle with the socialist camp, before the collapse of the USSR and Eastern Europe, German capitalism had to compete with the full employment, free health care, day care centers, generous vacations, sports and cultural development, and many other social benefits that workers in the German Democratic Republic enjoyed.

This is what forced the West German bosses to make concessions to the unions and keep wages and unemployment benefits at a relatively high level. Once the Berlin wall came down, the basis for concessions to the working class evaporated.

Today the reality for German workers is just the opposite of what it was during the Cold War.

The entire German ruling class and all its political parties and media made a sharp right turn in 2003 and opened up a campaign to drive down the wages of German workers, slashing unemployment benefits and pushing back labor unions.

So-called “mini-jobs” were created, where workers worked for 450 euro a month, which was the low end of the wage scale. These workers could only get health insurance if they paid 140 euro a month. Millions of unemployed workers, who earlier could count on years of living-wage unemployment benefits, were instead forced to take “mini-jobs.” Unemployment insurance benefits were lowered. Part time jobs were expanded and pushed by the bosses in place of previously stable full-time jobs.

Today, poverty stalks German workers. According to the Institute for Employment Research, the research arm of Germany’s federal employment agency, 25 percent of all German workers earn less than 9.54 euros ($10.68) an hour. In Europe, only Lithuania has a higher percentage of low-wage earners — who earn less than two-thirds of the national average wage. (The Guardian, Aug.13, 2013)

“Between 1999 (when the euro launched) and 2010, unit labor costs increased 20 percent in Spain, 25 percent in Italy and a more modest 5 percent in France; Germany’s barely budged at 0.6 percent. All Mediterranean economies currently have higher unit labor costs than Germany.” (Investopedia, Dec. 3, 2012) That is because unions in those countries resisted austerity more strongly.

Low wages at home and control of the euro allowed the German bosses to use their powerful, dynamic industrial base to make semi-colonies out of their poorer imperialist rivals on the continent.

The expansion of trade and investment into southern Europe is part of the same “Lebensraum” tendency described earlier — only expressed economically instead of militarily. It is driven by the same ruthless, aggressively expansionist character of German capitalism that led to the two wars.

And that is why, to the puzzlement of bourgeois experts, Chancellor Angela Merkel, Finance Minister Schäuble and the Frankfurt bankers are running roughshod over the Greek people and all the poorer countries of Europe and causing devastation to the working class, without the slightest inhibition or regret, regardless of the consequences. Nothing less than a full-scale revolt of the working class can stop them. It is hoped that the push-back by the masses in Greece will be the beginning of a broader struggle against the banker-imposed austerity program of Merkel and company.