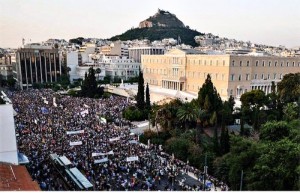 June 30 — As we go to press, rumors of a last-minute attempt by the Syriza government in Athens to ask the euro bankers for a third bailout have been rebuffed by German Chancellor Angela Merkel. Whatever the outcome, the fundamentals of the Greek situation will remain unchanged. The bankers of Berlin, Paris, Brussels, Rome and Wall Street are trying to extract blood from the Greek masses.

Tens of thousands of people demonstrated in Athens’ Syntagma Square on June 29 against the terms of the “Troika” — the International Monetary Fund, the European Central Bank and the European Commission. The demonstrators opposed the continuation of debt slavery imposed on Greece by the bankers of Europe.

After five months of negotiations between the left social-democratic Syriza government and the representatives of 18 other European governments, the Troika, which calls the shots, has remained adamant. The financial vultures have demanded further austerity measures. Earlier versions of these measures — pension cuts, health care cuts, wage cuts, layoffs and tax increases — have already brought about mass suffering in Greece on a society-wide scale.

And now the imperialist bankers have cut off funds to Greece, forcing it to close its own banks for at least a week. The goal of the Troika is to bring about capitulation at the negotiating table as well as to accomplish regime change. If there is economic chaos, the Syriza government could be blamed. But if the government capitulates and enforces concessions, it can also fall. So, either way, the bankers want to teach Syriza and parties in other countries not to dare to challenge austerity.

The bankers have justified their austerity demands on the grounds that such measures will pave the way for economic growth and an end to the economic crisis. This fantasy was dreamed up by the bankers to make their greed and lust for profit seem as if they sought benefits for Greece.

The Greek people have already had austerity. Instead of growth they got a Great Depression in which the economy shrank by 25 percent, the unemployment rate rose to 27 percent and youth unemployment to 50 percent, with 50 percent of Greeks living at the poverty level or below, and 25 percent of businesses having gone bankrupt — all to pay the bankers their pound of flesh.

The so-called Greek bailout began in 2010. Bankers and investors had earlier bought Greek government bonds to make a profit on the interest they would receive. When the economic crisis hit in 2008, it caused a decline in government revenue. In order to pay back the bankers and other bondholders, the capitalist Greek government had to borrow more money from bankers — to pay back bankers.

Soon the financiers cut off Greek borrowing in the bond market, forcing the government to ask for a bailout in 2010. It was the bailout conditions imposed by the Troika — the IMF, the ECB and the EC — that led to the economic catastrophe that struck the Greek working class and the middle class.

The Troika lent the Greek government 110 billion euro. But by 2012 the government, due to high interest payments and economic collapse, was still deep in debt. It had to ask the bankers for another bailout of 130 billion euro — which came with more austerity conditions.

So the Greek governments of the last five years have been imposing austerity measures on the masses in order to pay back interest on loans. The high payback on the loans created more debt. This required more borrowing, which in turn required more payback.

Of all the hundreds of billions that the Greek government borrowed, it is estimated that only about 10 percent of the money ever got to the government to pay for expenses; the other 90 percent went to financial institutions.

The Syriza government, led by Alexis Tsipras, has made numerous concessions to the demands of the Troika in the past month. But those concessions were not enough for the bankers. To try to improve the government position, Tsipras has called for a July 5 national referendum on whether or not to accept the Troika’s proposals. The referendum is supposed to be a simple “Yes” or “No” vote on the proposals.

The origins of the referendum go back to the breakdown of negotiations on June 23. On June 22, a proposal from Syriza to a Eurogroup summit meeting of ministers was in direct contradiction to Tsipras’ post-election pledges to defy the austerity measures and demand debt relief, as well as in opposition to the left wing of his party.

At that meeting Syriza’s proposal included 7.9 billion euro in savings to meet the demands of the Troika. Among the concessions were a pledge to end early retirement next year; raising the retirement age to 67 in stages; phasing out supplementary payments to poor pensioners; raising pension contributions by workers to 2 percent; and raising pensioners’ health care contributions to 5 percent.

The Troika dismissed any idea of debt relief but promised to “consider it” sometime down the road.

Once the terms of the proposal got back to Athens, a revolt began within Syriza and important members of parliament said they could not support it. But before Syriza could get a chance to reject the concessions put forward by Tsipras — because they went too far — the bankers rejected the proposal because it did not go far enough. Tsipras had to walk out of the negotiations; there have been none since.

As the deadline of June 30 for a payment of 1.8 billion euro to the IMF approached and the government could clearly not pay it, Tsipras called for the referendum on July 5 to “strengthen his negotiating position.”

Having a referendum on the austerity terms proposed by the Troika is no doubt an appealing idea. To put the bankers’ terms up for a popular vote puts the question out there.

Whatever anyone thinks of Syriza, now that the referendum has been proposed and assuming that it comes off, everyone must campaign for the strongest possible “No” vote. The bankers show their contempt for bourgeois democracy by opposing the referendum.

But there is another side to the story. In the first place, there was already an election against austerity on Jan. 25, and Syriza won that election handily. The popular mandate to oppose austerity has already been given. The Syriza government has been on record both before and after the elections as opposing austerity. It was opposed to the debt and to being forced into onerous anti-working-class concessions.

And there is another danger. All of European and Greek capitalism can start a campaign of fear that could swing the referendum in a “Yes” direction.

The Tsipras wing of Syriza has repeatedly underestimated the resistance of the bankers. It has talked over and over about an “honorable settlement,” it pledged to find a compromise, it talked about “our common European home,” and so on, ad nauseam.

Instead of taking an adamant stand against the bankers and preparing for battle, the Tsipras leadership has fought this struggle without clear resolve, without any plan and without an aggressive posture toward the bloodthirsty, predatory bankers who have been abusing, oppressing and exploiting the Greek workers and the population in general.

In politics, if you are going to war, you had best be prepared for battle. The Troika was fully prepared, but Syriza was divided and irresolute.

To be sure, the relationship of forces was highly unfavorable to the Greek government. It is impossible to overlook the power of European and U.S. finance capital.

The first thing to be done was to reject the terms or rules of the struggle imposed by the enemy. But Syriza declared in advance its intention to remain with the euro and to come up with a settlement that honored the eurozone.

Even for a capitalist government, such as Syriza is despite its leftist rhetoric, sticking to the eurozone framework dominated by German imperialism is a losing proposition. Not being prepared to break sends a message to the bankers that you have already given in most of the way. After all, if Syriza is determined to remain in an arrangement where Greece has no sovereignty over its own currency and the bankers who are trying to skin it alive are also in charge of its currency, then Syriza has ceded the most favorable terms to the financial predators.

The current predicament of the Greek working class is the result of the relationship of forces between the big European powers and U.S. bankers, on the one hand, and Greece, a small imperialist country that is also a semi-colony of Germany and other powers, on the other.

There are many other ways to call out the popular masses to demonstrate support and strengthen your negotiating position. That is what Syriza should have been doing since last January.

Furthermore, it is clear what the Troika’s negotiating position is going to be if further negotiations take place over a deal. The bankers will demand capitulation, concessions, hardships for the masses, payoffs for themselves, etc. Everything that has occurred in the last five months shows that the next phase of the struggle calls for defiance, mass mobilization and the willingness to do whatever it takes to break the stranglehold of the bankers.

The struggle is far from over, however. The very greed of the bankers has the capability to further destabilize the situation and set off an even bigger and more revolutionary struggle — a struggle which must be directed at Greek capitalism as well as European finance capital.