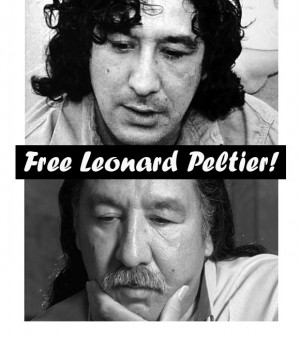 Following are excerpts from a statement written by Native political prisoner Leonard Peltier on June 26, 2015. Peltier has been falsely imprisoned for 40 years. In a July 5, 2007, Workers World article, Brenda Ryan wrote: “In Native American history, June 26th is a day of anguish. On that date in 1975, two FBI agents in unmarked cars drove onto a ranch on the Pine Ridge Indian Reservation. More than 150 agents, vigilantes and law enforcement surrounded the property and opened fire. In the resulting shootout, a young Native man and two FBI agents were killed.

“This assault has not ended. For 31 years, Leonard Peltier, a Lakota/Anishinabe organizer of the American Indian Movement (AIM), has been in prison, falsely accused of killing the FBI agents. U.S. prosecutors have publicly admitted that they do not know who actually fired the shots that killed the agents, but they have refused to consider Peltier for parole or to turn over thousands of pages of documents that could prove his innocence.” Go to Int’l Leonard Peltier Defense Committee at tinyurl.com/ngy72uf to read the entire statement and for more information on the struggle to free this heroic freedom fighter.

This year I am most concerned with our children and the taking of their own lives. This is very sad to me, as it is to you, and I know there are many reasons for them to feel such despair and hopelessness. But I can only ask and encourage all of us to double our efforts to show them love and support, and let them know that we will always look after them and protect them. That includes asking big brothers and sisters to look after the younger ones. They are our future and have to be protected and to learn to be the protectors. This is not something we can live with, we need to all work to change this.

And this year it is even more urgent that we come together to protect our sovereignty. There are so many issues to face and fight. We continue to fight for our Black Hills and to stop the XL pipeline from poisoning our water and our land, and I stand with the Lakota, Dakota and Nakota Nations, and all people of like mind in this fight.

The destruction of our Mother Earth by the heavy and toxic Tar Sands oil, fracking, gas and oil drilling and uranium mining is unacceptable to me and to us. We are supposed to be protecting these things even as others try to push us aside. I honor all of our relatives who are on the front lines of this fight.

And after all that I have seen in these 40 years behind bars, I was still shocked to see what they are trying to do to the Apache people at Oak Flats. This cannot be tolerated. It is not only a blatant money grab at the expense of a tribe’s Sacred site, but it is an effort to push us back in the direction of termination by ignoring our rights as sovereign nations. This we will not tolerate. Nothing is sacred to these people and they will continue to try to bulldoze us out of the way without even a single thought to our coming generations if we do not continue to stand up and oppose them. We must be ready for anything or we will lose all that we have gained in the last 40 years.

The continued use of racist mascots is something that we can never accept as Indigenous peoples and we need to all continue to push to end that racist practice.

Time is something I have learned a lot about in these years in prison. And now I can see that time is slipping away from me and I know that if I do not get out under this President I will almost certainly die here in prison.

I have been able to survive with the hope you have given to me and your prayers and I am grateful for that support from all of you.

I continue to pray for the family of my brother Joe Stuntz [killed by the FBI] and for all those who paid such a dear price in those bitter times 40 years ago.

In the Spirit of Crazy Horse.