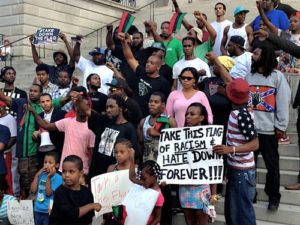 Columbia, S.C., June 29 — Things finally jumped off at the Statehouse tonight. The Confederates had called another rally. When this reporter got there around 4:30 there was a small group of them with large Confederate flags and a small group of us with homemade anti-racist signs.

Then a convoy of cars with the red, black and green flags of Black Liberation showed up. We were joined by a well-organized group of young Black women and men from Building Columbia’s Future and Bloods Crips Folks.

They occupied the space from the monument to the street, blocking off the graybacks. BCF marched over and rallied on the Statehouse steps when Confederate reinforcements arrived in pickup trucks with huge Confederate flags. They were driving by, slowly gunning their engines, when one of the flags came off a truck. The driver jumped out and did a reenactment of Confederate Army General George Pickett’s charge at Gettysburg during the U.S. Civil War — with similar result.

The driver went down, his friends retreated, the cops rushed in and — assessing correctly the relationship of forces — arrested him.

The racists disembarked up the block and began heading toward the Black History monument on one side of the Statehouse, so we all ran over that way. Several fights ensued around the Statehouse grounds, all ending up pretty much the same way — Confederates rolling on the grass with empty flagpoles. At the end of the day, the cops blocked off Gervais Street, an antiracist crowd occupied the Statehouse grounds and about 10 remaining Confederates stood behind a line of cops.

Along with the great BCF group, the anti-Confederate flag group included a contingent of high-school-age white women, who were there all day, and two homeless white workers.

My homemade sign got a lot of attention. It said on one side, “Honor the millions who died in slavery — Take it down!” and on the other side, “My ancestors fought for that flag — They were wrong!”

At one point the graybacks started singing “Dixie.” A TV news clip showed me singing and shouting the words to “John Brown’s Body” in their face.

A large anti-Confederate-flag rally in Columbia is planned for July 4. The South Carolina State Senate votes on July 6 about taking it down. A North Carolina Klan group has announced a rally at the Statehouse in Raleigh on July 18. It ain’t over.