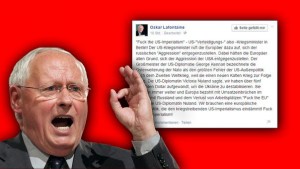 Oskar Lafontaine, former German finance minister and political leader of, first, the Social Democratic Party, and most recently the Left Party, shocked the pro-U.S. German media and political world with his June 23 comment written on FaceBook: “Fuck U.S. imperialism.” He was commenting on the visit to Berlin of U.S. Defense Minister Aston Carter, whose purpose was to enlist Germany in the military escalation directed at Russia.

Lafontaine represents a leftist view. His position, however, with or without the F-word, represents many ordinary people in Germany who want no part of a war with Russia. It also represents a large sector of the German ruling class that hates following a foreign policy that harms German business interests, while serving Washington’s geopolitics. As a former cabinet member himself, Lafontaine is well aware of ruling-class opinions.

U.S. and German imperialism have been political and military allies since soon after Germany’s defeat in World War II in 1945. This alliance, however, is not the same as a convergence of interests in all spheres. Germany has been forced to be subservient to the U.S. Even the substantial economic investment and trade between the two countries fails to eliminate imperialist economic competition.

Lafontaine gave a context to his strong word choice. It was a reply to U.S. State Department’s Victoria Nuland’s comment in February 2014. Nuland, a notorious anti-Russian neo-con, commenting on the European Union’s less aggressive policies regarding Ukraine, “Fuck the EU.” Given German imperialism’s leading role in the European Union, what Berlin heard was “Fuck Germany.”

The U.S. has insisted that the EU countries impose economic sanctions against Russia. Through NATO, Washington is also moving troops and weapons into countries that border with Russia. They plan the largest war exercises in Eastern Europe since the collapse of the Soviet Union, also directed against Russia. This escalation raises the risk of a wider war than that going on now in Ukraine, and one that threatens Germany much more than it does the U.S.

As the danger of war grows, dissident voices have been raised in Germany. Not just from leftist politicians like Lafontaine, but from rightist and centrist politicians. This includes allies of the late leader of the rightist Christian Social Union in Bavaria, Franz-Joseph Strauss, who held cabinet offices and led the CSU for decades until his death in 1988. Strauss was considered the furthest right of mainstream German politicians.

One such CSU ally, Wilfried Scharnagl, recently wrote a book, “In the Abyss: A Polemic for a Different Approach toward Russia.” In this book, he argues for improved German-Russian relations. He points out that in carrying out this diplomacy, one has to put oneself in the position of the opponent.

In a June 23 interview with the German daily newspaper Junge Welt, Scharnagl said, “My perspective is that in 1989 in the time of historical turning after the collapse of the Soviet empire [sic] the West did not make use of the opportunity to build a new and peaceful European order together with Russia, but instead resumed the old habits.”

Scharnagl criticized the German media for analyzing relations with Russia all in “black-and-white,” and not seeing or giving any credit to Vladimir Putin’s point of view. Of course Scharnagl was criticized as being “pro-Putin” by these same media, when it should be obvious he was laying out what he saw as a better policy for defending German imperialist interests.

“In U.S. politics,” Scharnagl continued, “there are forces that demand a much sharper line against Russia in the Ukraine crisis, for example, sending extensive arms supplies to Ukraine, than the Europeans want to do. Germany under Chancellor Angela Merkel is firmly and resolutely against this policy of delivering weapons, and she comes under fierce and unspeakable attacks from U.S. political leaders such as Senator [John] McCain and his friends.” He implied that the German media is influenced by these attacks.

Three former German chancellors, Social Democrats Helmut Schmidt and Gerhard Schroeder, and Christian Democrat Helmut Kohl, all said they thought it was a mistake not to have invited Putin to the G7 summit in Elmau, Germany, and made this G7 meeting a G8 with Russia.

Schmidt, a Social Democrat like Schroeder, has called sanctions against Russia “stupid,” saying: “It would be better, in the interest of peace, to sit down and talk instead of threatening sanctions.” (Reuters, March 27)

Kohl said: “The upheaval in Ukraine was not handled intelligently. There’s also been a lack of sensitivity with our Russian neighbors, especially with President Putin.”

Schroeder has a long-term friendly relationship with Putin. Because of this and his record of keeping Germany out of the U.S./British-led invasion of Iraq in 2003, he has been attacked by pro-U.S. politicians and media in Germany. He too, however, is an imperialist politician who led Germany during its participation in the U.S.-NATO war against Yugoslavia in 1999.

That the opinions of these German politicians have a base in the ruling class can be seen in the comments of the chief economist at Bremer Landesbank, Folker Hellmeyer, in the June 6 issue of German Economic News. This banker says that because of the U.S. sanctions against Russia, “German exports declined year-over-year by 18 percent in 2014, and by 34 percent in the first two months of 2015.” He says it is really worse because of “secondary effects,” such as that “European countries with strong business in Russia, including Finland and Austria, are economically hit very hard. These countries consequently place fewer orders from Germany.”

Hellmeyer adds that the even greater problem is the breakdown of trust between Russia and the EU that makes future long-term projects questionable. “The people in Germany and the EU will pay the price through lost prosperity and stability. The unmeasurable damage lies in an elevated geopolitical risk situation for the people in the EU.”

Regarding Ukraine, Hellmeyer referred unfavorably to Nuland and added: “The fact is that by the coup in the Ukraine, an oligarchy friendly towards Moscow was replaced by an oligarchy now oriented toward the United States. This is geopolitics, which benefits third forces, but definitely not Germany, not the EU, not Russia and not Ukraine.”

That these German ruling-class politicians and bankers — and we’ve only quoted a few of them — take issue with U.S. aggressive policies illustrates the serious contradictions between German and U.S. imperialist interests. It can mean, for one thing, that the U.S. will step up its already interventionist policies to influence German internal politics in order to prevent any rapprochement between Germany and Russia.

Preventing such an alliance has been a cornerstone of U.S. foreign policy since the end of World War II. During the existence of the socialist Soviet Union, there was really no question that capitalist West Germany would or could ally with it against the U.S. Russia, a capitalist country, no longer poses a threat to German capitalists; a realignment is at least conceivable, whether or not it is likely.

Also, if open argument exists within the German ruling class about Germany’s relations with the U.S. and Russia, there will be an opening for leftist, working-class and anti-war politics in Germany. Lafontaine’s comment is itself proof of that opening.

For U.S. anti-war forces, pointing to the disagreements with Germany makes another argument that exposes U.S. aggression in Ukraine and the dangers that U.S. militarism can lead to a wider and more dangerous war.