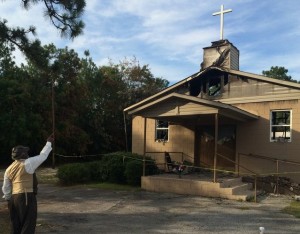 The capitalist state in the U.S. coexists cosily with right-wing terrorists. This vile fact has once again been confirmed in the aftermath of the murder spree by racist terrorist Dylann Roof.

As of June 29, six Black churches in the South have either been destroyed or suffered severe damage from fires since Charleston. At least three are confirmed to have been caused by arson, according to the Southern Poverty Law Center. The loss to the people of these communities comes to hundreds of thousands of dollars.

Worse, the torchings are a threat of further violence to a people whose painful history at the hands of white exploiters still resonates so strongly.

The first burning deemed by fire marshals to be arson destroyed the College Hills Seventh Day Adventist Church in Knoxville, Tenn., on June 22. The Knoxville fire department said the arsonist set multiple fires on the church’s property. The church’s van was also burned.

The very next day, a fire in the sanctuary of God’s Power Church of Christ in Macon, Ga., was also blamed on arson.

And the day after that, a fire was deliberately set at the Briar Creek Baptist Church in Charlotte, N.C., that destroyed an education wing meant to house a summer program for children. The gymnasium and sanctuary burned, causing an estimated $250,000 in damage.

That same week, three other Southern Black churches — in Tennessee, Florida and South Carolina — also suffered fires, although two may have had natural causes. Investigations are continuing.

After what happened in Charleston, S.C., there can be little doubt that the arson fires were set by white supremacists, whose outpourings of hate in print and on the Internet call again and again for violence against people of color, using at best flimsily disguised language and at worst the vilest and most degrading terms.

One might think that mass murder of the type that happened in Charleston would immediately lead to arrests of those advocating race war against Black people. We have seen many examples in recent years of elaborate sting operations set up by the FBI and local police authorities to ensnare Black militants on charges of plotting terrorist acts — which government agents had encouraged and facilitated.

But just as with the murders of the three civil rights workers in 1964 — James Chaney, Andrew Goodman and Michael Schwerner — by members of the Ku Klux Klan, the authorities have not intervened to stop such attacks, even though it is logical to assume that, in this day and age of wide surveillance, they have knowledge of them.

Such action by the state, however, would not fit in with its primary purpose — which is to facilitate the extraction of capitalist profits from the labor of millions of workers by protecting the status quo. And this status quo is becoming increasingly unbearable for millions, as the gap grows between the very rich and the rest of us. So the state becomes increasingly draconian, with mass incarceration, especially of Black and Brown people, and the training and equipping of local police forces for military-style combat — against the oppressed, not the racist terrorists.

There is another aftermath of Charleston, however. It is the encouraging sight of Black and white together demanding the Confederate flag and statues be removed. Southern whites are coming into the streets to stand with their Black neighbors, friends and co-workers. Unlike the racists, who mostly remain in the shadows while carrying out their fascistic acts, the Black and white people fighting racism are visible and vocal — and inspiring others with their courage.

Courage is something glaringly lacking in the bigots. Who but a coward would choose a Black church to carry out a murderous rampage? Roof knew no one there would be armed. And those who torched other Black churches did so in the dead of night.

But it is not just personal courage that these fascist elements lack. Their whole social outlook is based on craven capitulation to the capitalist ruling class. They fulminate against those who are the most oppressed, blaming them for all the ills of society — while doing the dirty work for those who lord it over the vast majority.