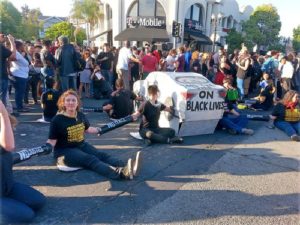 Oakland, Calif. — Over 500 people came out to the Lakeshore Shopping District here on June 12 to angrily mourn the loss of yet another young Black man at the hands of the Oakland Police Department. The vigil, called by Demouria Hogg’s family and the Anti-Police-Terror Project, shut down for over two hours the busy intersection where the OPD killed Hogg. The two hours symbolized the time in which the OPD created a crime scene and then killed this father of three young children.

Organizers, who had created a replica of Demouria Hogg’s car, placed it in the middle of the intersection. There a number of Black activists, other people of color and white allies locked themselves to the front and back of the car for the entire vigil. The OPD had to reroute traffic and close down the I-580 exit ramp, at the bottom of which was the spot where Hogg was shot and killed by cops for sleeping in his car.

Hogg was found on June 6 unconscious behind the wheel of his car, which was stopped at the curb in a lane exiting from I-580 near the Lake Merritt shopping district. Firefighters called the police after they approached the car to provide assistance, but saw a gun on the passenger seat. Two hours later Hogg was taken to the hospital and pronounced dead, after only regaining consciousness for less than a minute, according to the OPD’s own dispatch tapes.

After the two-hour vigil and shutdown of the intersection, the activists unlocked themselves from the car and protesters proceeded to march in the streets to the Alameda County Courthouse. This was after a night march on June 10 which the Black Youth Project called to defy Mayor Libby Schaaf’s curfew, which she imposed on May 21, against night marches in the streets.

The BYP march was the last in a series of marches held by activists to protest and defy the curfew. The June 10 action of more than 100 people was successful in that the crowd marched through the streets of downtown Oakland without any attempt by the police to block them. It was clear that Schaaf had finally been forced to back down.

However, the June 12 march was confronted by a huge police presence. Cops didn’t initially try to stop the march, but maintained a strong presence of motorcycle and police forces on foot along its entire length. Police aggressively pushed marchers, including young children, who were trying to maintain the line. When authorities blocked the march from getting to the courthouse and the downtown area, marchers headed back up the other side of Lake Merritt and along Grand Avenue toward the starting point.

When the marchers turned onto Grand, the OPD tried to confine them to one lane. Protesters broke through the lines, taking all the lanes of eastbound traffic and for a while the westbound lanes as well. When the marchers reached a point close to the Lakeshore shopping district, the police formed a line blocking the march from going any further.

Protesters quickly outmaneuvered the cops and ran on the grass around their lines, forming up on the street opposite the police lines. The march continued to the rally starting point, where the action was brought to a successful close. Family and friends lingered to light candles and mourn at the site where Demouria Hogg was killed.

A video commemorating the vigil can be found at tinyurl.com/qbj6clv.