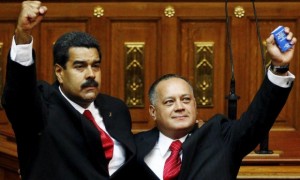 Venezuelan President Nicolás Maduro has called on supporters to join a campaign rejecting a smear campaign against the Bolivarian Revolution. Maduro was responding to a lengthy May 18 Wall Street Journal article that falsely accuses National Assembly President Diosdado Cabello of drug trafficking and money laundering and that slanders Bolivarian Venezuela as a “global cocaine hub.”

One Twitter comment quoted in the Journal pointed out how the “evidence” is being gathered: “We all know that whoever wants his green card and live in the US to visit Disney can just pick his leader and accuse him of being a narco. [Drug Enforcement Administration] tours will attend to them.”

The Venezuela News Agency AVN pointed out on May 22 that a campaign to demoralize and divide is a preparation for a military attack. The corporate media are vehicles for repeating lies in order to make them believable.

The current media campaign attempts to build on a March 9 executive order issued by President Barack Obama “declaring a national emergency with respect to the unusual and extraordinary threat to the national security and foreign policy of the United States posed by the situation in Venezuela.”

This disinformation campaign, besides being aimed at Venezuela, is meant to confuse and disorient people in the United States and around the world who are looking for a path out of the misery of capitalism and who oppose U.S. schemes to reconquer Latin America and the Caribbean.

It isn’t working. On May 15, 16 U.S. congressional representatives signed a letter to President Obama opposing unilateral sanctions on Venezuela. The letter says that “regional opposition to the sanctions at the Summit of the Americas was virtually unanimous” and goes on to list condemnation of the sanctions by regional bodies. These include the Community of Latin American and Caribbean States, which represents every independent nation of Latin America and the Caribbean, and the Group of 77 developing countries in the United Nations, led by the Latin American delegation.

As another sign of the unbreakable bond between socialist Cuba and Bolivarian Venezuela, all five Cuban heroes, who had been imprisoned in the United States, traveled to Venezuela with their families after the May Day celebration in Havana, along with President Raul Castro and President Maduro.

The recent “news” reports attacking Venezuela show the U.S. still considers Latin America and the Caribbean to be imperialism’s “backyard” as it arrogantly issues unilateral lists and sanctions against sovereign countries. The people united can stop it.