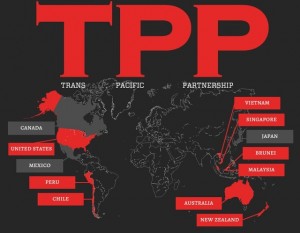 With the Obama administration seemingly hell-bent on getting its “Trans-Pacific Partnership” bill passed, which many critics say is not a trade bill at all but a giant giveaway to the corporations, we reprint below excerpts from an August 1993 article by Sam Marcy on “Free trade, monopoly and NAFTA.” Marcy was a leading Marxist thinker, organizer and the founder of Workers World Party. His perspective on that “free trade” agreement is equally illuminating today.

Free trade as it existed before the middle of the 19th century has virtually disappeared. Its replacement by giant, marauding imperialist monopolies has meant an increasingly restricted role for the smaller nations of the world and increased domination by the most powerful imperialist monopolies throughout the globe.

Small-scale production, which had a more or less stable role in the epoch of the classical competitive stage of capitalism, has an altogether unstable and precarious existence in the epoch of the imperialist monopolies. What has given it an extension of life, so to speak, is the growth of the service sector. But that is dependent on the stability of the capitalist monopolies. A serious economic crisis would almost certainly result in a catastrophic situation for small business as well as the service sector.

Most important, monopoly capitalism has meant a restricted role for the working classes, given the virtual omnipotence of the monopolies that control the imperialist governments of the world lock, stock and barrel. It is in this contemporary context that we should view the attempt by the U.S. to create a sort of “free trade zone” among the U.S., Canada and Mexico.

A great deal of importance has been attached to the North American Free Trade Agreement, originally negotiated by the Bush administration. The Clinton administration, after making a few changes of its own, is pushing hard for the U.S. government to adopt this agreement.

The organized labor movement is opposed to it. Nevertheless, the Clinton administration is moving swiftly to get the agreement adopted.

It is important, however, to consider it from the viewpoint of the interests of the working class, not only in the U.S. and Canada, but most particularly in Mexico.

What should be the U.S. working class’ attitude? From a class point of view, neither the agreement nor any of its side or supplemental agreements should be supported. We should not support the expansion of U.S. capitalism anywhere — north, south, east or west.

The U.S. working class’ task is to increase its role in the struggle against monopoly — not to conduct a struggle on behalf of extending monopoly capitalism. It is good that the AFL-CIO opposes NAFTA. But it’s on very narrow grounds — how NAFTA affects the particular unions. In discussing relations among the U.S., Canada and Mexico, however, the unions are inevitably drawn into the vortex of world politics. They are obliged to take a position on the role U.S. imperialism plays in the contemporary world. …

No chance of tranquil development

All the talk that NAFTA will inevitably create jobs in the U.S. and Mexico as a result of Mexico lifting restrictions against U.S. corporations is unwarranted. It entirely leaves out of consideration the nature of capitalist development, which is marked by inevitable crisis.

Capitalism not only moves upward; it can also decline to abysmal levels. That’s only one aspect of it. Another is that the capitalist class will abandon one market for its products, no matter how lucrative, in the interest of another more lucrative market where the rate of profit is even higher.

The objective of imperialist diplomacy, and of U.S. diplomacy in particular, is to aid the capitalist monopolies wherever they seek to broaden their influence. It’s in their nature to pull out of Australia and go to New Zealand, or go from New Zealand to Nicaragua or Mexico if the rate of profit is higher. This is the motive force of capitalist development.

It was good for the AFL-CIO and all its affiliated unions to at least oppose the agreement, even if only on narrow trade-union grounds. But that is inadequate, considering the agreement’s dimensions. To go along is to become a silent partner to the devastating role of U.S. finance capital abroad — and at home.

Labor’s real objective should be to forge a solidarity agreement among the trade unions of the U.S., Canada and Mexico. It must take into consideration, first and foremost, that Mexico is an oppressed country and that the U.S. and Canada are imperialists, although Canada is a junior partner in the struggle. …