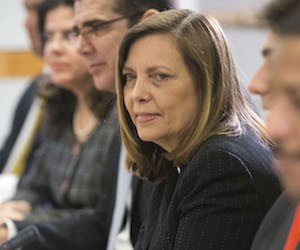 The third round of talks between Cuba and the U.S. to normalize diplomatic relations took place at the U.S. State Department on May 21 and 22. In press conferences at the close of the meetings, the chief negotiators of both delegations characterized the meetings as professional, respectful and productive.

However, no date was set for upgrading the interests sections in Washington and Havana to embassies. And the U.S. blockade of Cuba is still in effect.

Cuban negotiator Josefina Vidal stated, “These talks were held after the U.S. government, in compliance with its international legal obligations under the Vienna Convention on Diplomatic Relations, issued a license to one bank to resume the banking services to the Cuban Interests Section in Washington under the conditions of the financial blockade in force.”

The Cuban Interests Section in Washington had been functioning without any bank account since February 2014.

U.S. Assistant Secretary of State for Western Hemisphere Affairs Roberta Jacobson declared the State Department would continue “to request funds from Congress for various activities in support of the Cuban people,” as it has since 1996. These activities have, in fact, been intended to undermine the Cuban people’s socialist revolution and advance U.S. corporate interests.

The Congressional Accountability Office reports that from 1996 to 2011, Congress appropriated $205 million for Cuban “democracy” assistance. Most of this went to the U.S. Agency for International Development, long exposed as a front for CIA operations. Congress has also allocated more than $25 million per year to fund TV Martí and Radio Martí, propaganda beamed from the U.S. to Cuba.

Some of the not-so-stellar use of U.S. tax dollars attributed to USAID and brought to light by AP investigative reporters are the smuggling into Cuba of illegal military grade communication devices by Alan Gross, which landed him in a Cuban prison, and the ZunZuneo caper to set up a Cuban “Twitter,” secretly paid for by the CIA.

Congress also voted money to send dissident recruiters disguised as Latin American youth AIDS educators to Cuba, the country with the most extensive, thorough health system, which distributes free condoms and successfully controlled the spread of HIV/AIDS early on. Students in the U.S. staggering under education debt or Detroit residents facing tax foreclosure and denial of water service could use that money right here.

None of those millions of dollars eased the hardships inflicted on the Cuban people by the U.S. blockade. These hardships were reported in detail to the United Nations in support of the annual resolution calling on the U.S. to end the blockade. Since 1992, the United Nations General Assembly has told the U.S. government in nearly unanimous votes to end the genocidal, unilateral commercial, economic and financial blockade. (See reports and news at cubavsbloqueo.cu.)

As of May 29, Cuba’s name will no longer appear in the U.S. government’s list of countries that supposedly “sponsor terrorism.” Including Cuba demonstrated that the list has not been based in fact, but is a weapon of imperialism that should not exist at all. In fact, it is the U.S. that sponsors terrorism. More than 3,000 Cubans have been killed in U.S.-sponsored terror attacks since 1959.

Cuba expects to be regarded and treated as an equal, a sovereign independent country, not a potential colony. That is the context for the talks that began on Dec. 17. The world is behind Cuba’s right to exist, especially the countries of Latin America and the Caribbean. Step by step, Cuba is moving forward.

The same united voice opposed the Obama administration’s March 9 executive order putting sanctions on Venezuela with the claim that it is a threat to the U.S., the biggest economic, military, nuclear-weapon-equipped force in the world.

As difficult as sorting out diplomatic relations may be, the biggest test of U.S. intentions comes over the question of its unilateral economic, commercial and financial blockade of Cuba. Before there can be full normalization, the blockade must go.