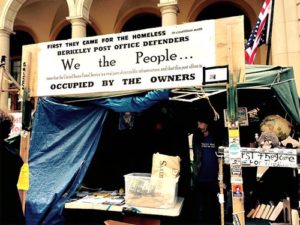 Berkeley, Calif. — The information booth is still standing. The occupation of the front of the Berkeley Main Post Office by “First They Came for the Homeless” continued into May. But the main battle to save this historic building was won on April 14. In an historic decision, a federal court dismissed a lawsuit filed by the Berkeley City Council and the National Trust for Historic Preservation — because the plaintiffs had already won.

Judge William Alsup ruled that the United States Postal Service “had to formally rescind its decision to relocate the post office.”

And to celebrate this victory, a large group of community activists, lawyers, postal workers and homeless advocates held a victory rally May 9 on the steps of the post office.

The struggle to save the Berkeley Main Post Office started the day that the USPS announced its plans to sell the building in the summer of 2012. The campaign took many forms, including rallying City Council support, outreach to the postal workers’ union and the Bay Area labor councils, setting up two encampments on the grounds of the building, filing a lawsuit, organizing rallies and posting YouTube sing-out videos.

According to Dave Welsh, a retired letter carrier who was very involved in the fight to save the post office, “Our victory is a result of nearly three years of intense political activity by the people of Berkeley, including two lengthy encampments. I think people have had enough of privatization. We all wanted to keep the post office as a public place. I hope this will be the beginning of many victories across the country.”

Susan Hammer, a shop steward of the American Postal Workers Union, thanked everyone for their hard work and talked about what this victory means for the Berkeley post office workers. Mike Zint, a leader of “First They Came for the Homeless” who has been part of the encampment, pointed out that this court decision is also a victory for the rights of homeless people.

He continued, “Not everyone is going to agree all the time. … But if everyone fighting for the same thing can hold it together, then sometimes we can make progress. And we’ve done just that here!”