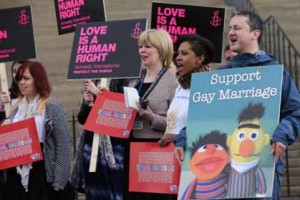 The people of the Republic of Ireland have stunned the world by making it the first country to say “Yes” to gay marriage by a popular, nationwide vote. Nineteen other nations have legalized same-sex marriage, but none by popular vote.

On May 22, over 62 percent of those voting cast ballots in favor of changing the Irish Constitution to define marriage as a union between two people, regardless of their gender. Twenty-two years ago, Ireland decriminalized homosexuality.

Jubilant crowds jammed Dublin as the results were announced. Some media had predicted an urban-rural split, with rural areas less willing to support gay marriage. However, while the yes vote was somewhat greater in the urban areas, only one county voted no, and by a slim majority. In County Dublin the “Yes” vote was over 70 percent.

Standing up to Church, colonialism

Why did so many Irish men and women turn out to say “Yes” to gay marriage?

Many people point to the extensive use of social media and the high turnout among young, many of them first-time, voters as the primary reason for the referendum’s success. Clearly, this was a factor, but, with support coming across age and rural-urban lines and in defiance of the Catholic Church, other factors were also in play.

Ireland is nominally one of the most Catholic countries in the world, with the Church claiming membership among 85 percent of the population. But today’s empty pews tell a different story. And so does the gay marriage referendum vote.

No surprise that the Church hierarchy opposed the referendum. The archbishops sent a letter to all 2,500 parish churches opposing a “Yes” vote. But the Church in Ireland today is widely discredited for its complicity with centuries of British rule, as well as the scandal involving widespread sexual abuse of children by priests. In rejecting the Church’s position, the Irish took a stand against the old colonial ideas of racism, sexism and homophobia.

“The Church is a foot soldier for colonialism,” said Ed Childs, a Workers World Party member in Boston who studies and speaks out on the liberation of Ireland. “Colonialism today comes from England and its dominant partner, the U.S.”

The Irish have resisted English oppression for 900 years, and the Irish people today are very aware of their proud history of fighting for independence. A major attraction for tourists, both foreign and homegrown, in Dublin is Kilmainham Jail, where the leaders of the 1916 Easter Rebellion were executed by the British. Tour guides speak passionately of the injustices done in that dungeon, where even small children served time for “crimes” like stealing a loaf of bread in a time of famine.

Big plans for celebrating the freedom struggle are already underway for next year, which will mark the 100th anniversary of the Easter Rebellion, a dramatic step in the armed struggle for Ireland’s freedom.

The fundamental reason for that oppression was — and is — economic exploitation. The control of English lords over much of Ireland’s agricultural land, the Penal Laws and other measures resulted in starvation and death. In the 1840s, during the “Great Hunger,” 4 million people — half the population of Ireland — either starved to death or were forced to emigrate, while food continued to be exported from Ireland to England.

One of the most celebrated cultural figures in Ireland today is the Irish author, playwright and poet Oscar Wilde, who at the height of his career in the 1890s was sent to prison in London for two years’ hard labor on charges of “gross indecency” — he was gay.

The joy in Ireland over the recent vote reflects pride and confidence in the people. The popular vote showed that working people can overcome divisive prejudices and strengthen their unity to fight back against the reactionary austerity drive being imposed on so many countries by the imperialist banks and corporations.