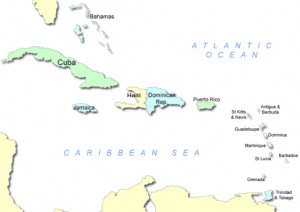 In the late 1940s, the United States baptized Puerto Rico the “Showcase of the Caribbean.” It was to be a role model for countries in the Caribbean and Latin America. This would supposedly be the outcome of the miracle of industrialization that the giant capitalist benefactor from the North carried out in a poor, colonized, underdeveloped small island.

It was a false miracle.

After destroying Puerto Rico’s agriculture, Washington encouraged foreign investment — that is, U.S. investment — which initiated a model that first set up light industries such as textiles, then imposed pharmaceutical and petrochemical companies, and later biotechnology and electronic firms.

Beside causing enormous environmental destruction, this process contributed nothing at all to the real development of the island. It did generate increased revenue for one sector of the working class — those in industries based on foreign capital that are export-oriented. They don’t produce what is needed on the island nor do the products of their labor benefit the economy of Puerto Rico — only Wall Street.

With regard to technology, we should look at what Sam Marcy, founder of Workers World Party/Mundo Obrero, wrote in his book “High Tech, Low Pay.” He showed that these industries neither improved the infrastructure nor introduced new knowledge necessary for Puerto Rico’s ability to master high technology, which it would need to develop its own initiatives.

That’s the true reality of the colonial state. Puerto Rico is now bankrupt, with a debt of over $73 billion — four times more than Detroit’s debt, which made the city declare bankruptcy two years ago. The debt is owed to the financial vultures of Wall Street as payment on municipal bonds, which come with a high interest rate.

However, because Puerto Rico is a colony, unlike Detroit, it cannot declare bankruptcy to renegotiate the debts. This became clear when the colonial administrator in office, Gov. Alejandro Garcia Padilla, signed a bankruptcy bill called “Creole” into law. This law was subsequently rejected by the Federal Court in San Juan. The Puerto Rican government is now appealing that decision to the Court of Appeals in Boston.

The serious crisis underway has been brewing for some time, intensified by the worldwide economic crisis since 2008. The colonial government has been paying its current debts by taking out new loans it cannot repay. It is selling bonds, but the credit rating companies continually reduce the classification of these bonds to progressively lower levels of junk bonds, which in turn makes the government pay higher interest, like a dog chewing its own tail.

But already there is nowhere to get more money in Puerto Rico to pay bondholders the payments that, according to the colonial Constitution, should take priority over the people’s welfare.

According to figures from the Federal Bureau of Statistics, unemployment in Puerto Rico is 11.8 percent. These “official” numbers understate reality. They count underemployment as employment, reduced hours as full-time, etc. Beside this, U.S. entrepreneurs have flooded into Puerto Rico to take advantage of government incentives, like huge tax breaks, that lackey Garcia Padilla has offered.

There is a massive migration of Puerto Ricans to the South of the U.S., totaling 144,000 in 2014. Many of them are young college graduates, representing a real brain drain on Puerto Rico’s future. The Puerto Rican people are paying for their education to benefit the empire!

According to Dr. Victor Ramos, president of the Medical Association of Puerto Rico, “Last year we estimate that 361 doctors left the island; this is one per day. This year we expect 500 or more.” (Independent.co.uk, May 25)

There is only one pediatrician for every 900 children on the island. The infant mortality rate is 8.2 per thousand live births. There is a general deterioration of health in the population, including mental health, which presents itself as an increase in depression and suicide.

Because of the high cost of living and loss of income, families are losing their homes. “For the first time in Puerto Rico, the value of foreclosed properties has exceeded $900 million.” (En Nuevo Día, May 23) Families often have to choose between paying the mortgage or paying for health or education.

On May 21, while Puerto Rico’s teachers celebrated the Week of the Teacher, Education Secretary Rafael Román Meléndez announced the closure of 94 public schools and the “reconfiguration” of 502. Previously the Boston Group — a management consulting group based in Boston and active worldwide — had recommended the school closures and austerity measures.

Next: The people resist.