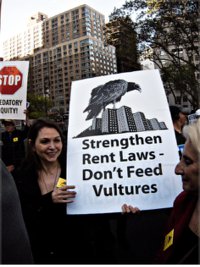 Thousands of tenants demanding their right to affordable housing gathered in Manhattan’s Foley Square on May 14 and marched across the Brooklyn Bridge. They were joined by labor allies: 1199SEIU United Health Care Workers East, the Communication Workers Local 1080, the Professional Staff Congress, the Hotel Trades Council and the Distributive Workers all had contingents.

The rent regulations for New York City that limit what landlords can charge their tenants are scheduled to expire June 15. A million apartments are covered, the largest bloc of rent-regulated housing in the United States.

New York City’s rent regulations are enacted into law by the state Legislature in Albany. The whole process is controlled by three men — Andrew Cuomo, the governor; John Flanagan, the leader of the Senate; and Carl Heastie, the speaker of the Assembly. What these three men agree to is generally what passes.

Real estate interests are major donors in New York and the daily weblog, the Gothamist, reported on May 15 that seven of the 10 largest donors to Cuomo represent real estate.

Over the past 10 years, manipulations by developers and politicians have removed tens of thousands of apartments from rent regulations. Homelessness has increased because, even outside of Manhattan, with its astronomically priced housing, it is difficult for poor and working people to find affordable apartments.

What politicians like Mayor Bill de Blasio consider affordable is questionable. What he is pushing is “inclusionary zoning,” which makes developers set aside some percentage — usually a small percentage, typically 20 percent — of the new housing they develop for “low-income” tenants. For instance, a new development in the Bronx has low-income apartments for people making over $28,000 a year, or $13.50 an hour working a 40-hour week. (Jacobin, Fall 2014) Thus, even these “low-income” apartments are out of reach for many low-wage, part-time and unemployed workers.

A number of the speakers pushed going to Albany June 9, on the free buses 1199SEIU is providing, and several made the connection between struggling for affordable housing and “Black Lives Matter.” Other speakers raised the issue of a $15-an-hour minimum wage and a union.