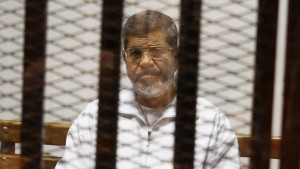 Egypt’s military ruling class tightened its grip over the country on May 16 as three judges imposed death sentences on the former president, Mohamed Morsi, and 105 other people.

Within hours, three other Egyptian judges and their driver were reportedly attacked and killed in North Sinai. Resistance has escalated in North Sinai over the last two years since the military ousted the elected government of Morsi and his Freedom and Justice Party.

High-ranking officials of the current Egyptian regime have accused the Muslim Brotherhood of being involved in the attacks in North Sinai, a charge the organization has denied.

Morsi and the 105 others were charged with, among other things, breaking out of prison during the waning days of the regime of former dictator Hosni Mubarak. Between Jan. 25 and Feb. 11, 2011, the Egyptian people rose up in rebellion against the Mubarak regime. The jailbreak by Morsi and his colleagues coincided with 18 straight days of mass demonstrations that ended when Mubarak was forced to resign.

Morsi and his colleagues were also charged with supporting Hamas, the Palestinian resistance movement in Gaza. Tunnels located on the border of Sinai and Gaza and used to smuggle in food and construction items banned by Israel have been bombed repeatedly by the Israeli military as well as the Egyptian military, even during the tenure of President Morsi.

The current Egyptian government, under former military leader Gen. Abdel Fattah el-Sisi, has designated both the Muslim Brotherhood and Hamas as terrorist organizations. Many of the defendants sentenced to death on May 15 were members of Hamas.

According to Ahram Online, “Hamas spokesman Sami Abu-Zuhri said in a statement on [May 16] that the verdict was based on ‘false information,’ saying that some of those Hamas members who were convicted in absentia, including ‘martyrs Tayseer Abu-Senema and Hossam El-Sanea,’ were dead at the time the offenses were carried out. Abu-Zuhri said that others convicted have been in the ‘prisons of the occupation [Israel] for years, such as Hassan Salama, who has been imprisoned for 19 years.’”

This decision has been condemned by many others throughout the world. Even Amnesty International said of the death sentences that they represented a “charade based on null and void procedures.”

Turkish President Recep Tayyip Erdogan told a rally in Istanbul: “The popularly elected president of Egypt … has unfortunately been sentenced to death” and accused the United States government of “turning a blind eye” to events in Egypt. (AFP)

Although the U.S. State Department has said that it does not support the death sentences, the Obama administration is continuing its direct aid to the Egyptian government to the tune of $1.5 billion every year. The Pentagon and the Central Intelligence Agency coordinate their activities in North Africa and the Middle East with the Egyptian regime.

Egyptian regime moves even closer to the West

The al-Sisi regime has supported the bombing, which has killed several thousand Yemenis since March 25. The U.S. government is providing Saudi Arabia with intelligence coordination and the refueling of fighter jets, many of which were purchased from U.S. military contractors.

In 2011, after the collapse of the Mubarak presidency, Egyptian special forces participated in the NATO war against Col. Moammar Gadhafi in neighboring Libya. Over the last few months, Egyptian war planes have bombed Libyan territory, adding to the chaos created over the last four years by the U.S. and European imperialists.

A recent report by the Washington Institute for Near East Policy emphasized Egypt as a pivotal country in the region. It was written by a number of functionaries of the U.S. military and intelligence establishment, including Samuel Berger and Stephen Hadley, both former national security advisors; James Jeffrey, a former ambassador to Turkey and Iraq; Dennis Ross, a former White House special envoy to the Middle East; and Robert Satloff, director of the Institute.

The article argues that “no strategy designed to bolster the state system in the Middle East is possible without a functioning U.S.-Egypt relationship.”

While acknowledging the violations of human rights in Egypt today, the report suggests that the only way to engage the al-Sisi government on these issues is within “the context of an ongoing U.S.-Egypt relationship.” The authors urge even stronger military ties between Cairo and Washington.

In a separate article related to Egypt’s involvement in the war against Yemen, Eric Tager of the Washington Institute wrote: “Entering the Yemen conflict also allows President Abdul Fattah al-Sisi to fulfill his oft-stated promise to help protect Egypt’s Gulf allies, who have given Cairo approximately $23 billion since the July 2013 overthrow of Mohamed Morsi. Indeed, shortly after taking office [as president] in June 2014, Sisi declared that Gulf security was an ‘inseparable part of [Egypt’s] national security,’ and he recently called for establishing a joint Arab military force to defend the Gulf from regional threats. … Cairo has already announced preparations for further air operations against Houthi positions, and signaled that it will send ground troops and special units if necessary.”