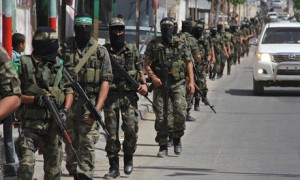 Gaza is the world’s biggest prison. Nearly two million Palestinian people are locked up there by Israel’s military blockade.

Last year, racist Israel killed over 2,000 Palestinians in Gaza, including 547 children. The Pentagon rushed in more bombs when the Zionist state ran low on ­ammunition.

Baltimore, similar to Palestine, is under a racist military occupation. The Baltimore police force — the sixth largest in the 26th largest U.S. city — treats Black people like prisoners. According to the 2010 U.S. census, while 72 percent of the Baltimore population are people of color, 46 percent of the police are white.

Parts of the Baltimore Black community look like a burnt-out war zone. The latest atrocity is mainly white Baltimore cops torturing to death Freddie Carlos Grey, whose spine was at least 80 percent severed while in police custody.

The killing of Grey — a 25-year-old African American — was a breaking point for Baltimore’s Black majority. Continuous demonstrations have erupted in the city, echoing the protests in Ferguson, Mo., against the police killing of Michael Brown.

Generations of African Americans in Baltimore have endured police terror. Maryland was a slave state and Baltimore’s cops were slave catchers.

The overwhelming number of today’s lynch victims are those murdered by racist police and vigilantes.

One of those lynched in Baltimore was Joe Wilbon, a skilled auto mechanic who had just opened his own shop. A police wolf pack beat up Wilbon on June 5, 2000, when he was trying to fix a car for one of his customers.

Cops later dropped Wilbon off at Mercy Hospital, where he was pronounced dead. The city refused to release his autopsy for months.

Baltimore’s mayor at the time was Martin O’Malley, who may run for U.S. president. O’Malley’s “zero tolerance” campaign against petty misdemeanors egged on police terror. Joe Wilbon’s blood is on O’Malley’s hands.

Over two-thirds of Maryland’s 21,000 prisoners come from Baltimore, which has just 13 percent of the state’s population.

The economic war against Black workers helps fuel the pipeline to prison, particularly for African-American youth. Five out of six factory jobs in Baltimore have been destroyed since 1970.

Thirty thousand workers were employed at Bethlehem Steel’s Sparrows Point complex just outside Baltimore. But nobody works there anymore at what was, 45 years ago, the world’s biggest steel plant.

Frederick Douglass was a caulker in a Baltimore shipyard. All three of Bethlehem Steel’s shipyards in Baltimore were shut down, costing thousands of jobs. Maryland Dry Dock closed down too.

Baltimore is one of the world’s greatest ports, but automation has eliminated jobs on the docks wholesale.

While the good paying jobs have disappeared and Baltimore has become more impoverished, the financial aristocracy’s wealth has skyrocketed. Two Baltimore stockbrokers — Legg Mason and T. Rowe Price — have between them nearly one-and-a-half trillion dollars in assets under management.

This vast amount of wealth shows the money is there for jobs, schools and free health care. These are human rights that the workers of Baltimore, especially the most oppressed, need — not police terror and mass incarceration.

Neither can the Black freedom struggle be stopped. Black and Palestinian lives matter.