From Los Angeles to Baltimore

We reprint here excerpts from the article “Marxism and insurrection” written on May 14, 1992, by Sam Marcy, founder of Workers World Party. For the full article, go to tinyurl.com/marxism-and-insurrection 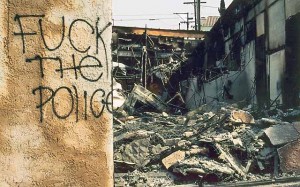 The brutal suppression of the Los Angeles insurrection offers a classic example of the relationship of bourgeois democracy to the capitalist state.

Marxism differs from all forms of bourgeois sociology in this most fundamental way: All bourgeois social sciences are directed at covering up and concealing — sometimes in the most shameful way — the predatory class character of present-day capitalist society. Marxism, on the other hand, reveals in the clearest and sharpest manner not only the antagonisms that continually rend asunder present-day bourgeois society but also their basis — the ownership of the means of production by a handful of millionaires and billionaires.

Material wealth has been vastly increasing along with the masses’ productivity of labor. But only 1 percent of the population amasses the lion’s share of what the workers produce, while a greater and greater mass is impoverished.

Oppression of a whole people

One cannot apply Marxism to any meaningful extent without first recognizing the existence of national oppression — the oppression of a whole people by capitalist imperialism. This is one of the most characteristic features of the present world reality.

The state in its essential characteristics is the organization, to quote Engels, of a “special public force” that consists not merely of armed men and women but of material appendages, prisons and repressive institutions of all kinds.

Most noteworthy are the prisons — more and more of them — calculated to break the spirit of millions of the most oppressed while pretending to some mock forms of rehabilitation.

In general then, the Los Angeles insurrection shows that democracy is a veil that hides the repressive character of the capitalist state.

The state grows in proportion as class and national antagonisms develop. Democracy is merely a form which hides the predatory class character of the bourgeois state. Nothing so much proves this as the steady and consistent growth of militarism and the police forces in times of peace as well as war.

The ruling class continually cultivates racism to keep the working class divided, in order to maintain its domination. This is as true at home as it is abroad. The forces of racism and national oppression have been deliberately stimulated by Pentagon and State Department policies all across the globe.

After every stage in the struggle of the workers and oppressed people, there follows an ideological struggle over what methods the masses should embrace to achieve their liberation from imperialist monopoly capital. There are always those who abjure violence while minimizing the initial use of violence by the ruling class. They denounce it in words, while in deeds they really cover it up. Yes, indeed, they readily admit the verdict in the Rodney King beating was erroneous, unfair. But — and here their voices grow louder — “The masses should not have taken to the streets and taken matters into their own hands.”

The Marxist view of violence flows from an altogether different concept. It first of all distinguishes between the violence of the oppressors as against the responsive violence of the masses. Just to be able to formulate it that way is a giant step forward, away from disgusting bourgeois praise for nonviolence. It never occurs to any of them to show that the masses have never made any real leap forward with the theory of nonviolence. Timidity never made it in history.

Indeed, Marxists do prefer nonviolent methods if the objectives the masses seek — freedom from oppression and exploitation — can be obtained that way. But Marxism explains the historical evolution of the class struggle as well as the struggle of oppressed nations as against oppressors.

As Marx put it, “force is the midwife to every great revolution.” None of the great revolutions has ever occurred without being accompanied by force and violence. And it is always the oppressor — the ruling class and the oppressing nationality — that is most congenitally prone to use force as soon as the masses raise their heads.

How much real difference is there between the suppression of the Paris Commune in 1871 and that of the revolutionary rising of the masses in Los Angeles in 1992? The brutal suppression differs only in magnitude and not in essence. While it might seem that in Los Angeles national oppression alone is involved, in reality it derives from the class exploitation of the African-American masses dating back to the days of slavery.

The Watts, Detroit, Newark and other rebellions in the 1960s did win significant concessions that eventually were enacted into law. They became the basis for a temporary improvement in the economic and social situation of the oppressed people.

None of the progressive legislation, up to and including affirmative action, would have been enacted had it not been for the rebellions during the 1960s and the 1970s. Yet now, almost three decades after the Watts rebellion, the masses are in greater poverty and the repression is heavier than before. The fruits of what was won have withered on the vine as racism and the deterioration of economic conditions took hold once again.

Once more the bourgeois politicians attempted to mollify the masses with endless promises of improvements never destined to see the light of day. This evoked a profound revulsion among the masses. It took only an incident like the incredible verdict of the rigged jury that freed the four police officers in the Rodney King beating to ignite a storm of revolutionary protest.

If revolutionary measures are ever to have any validity, doesn’t a case like this justify the people taking destiny into their own hands?