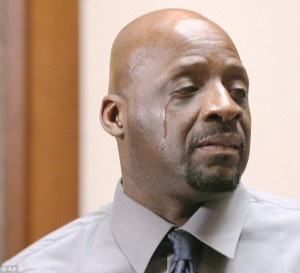 Detroit — All too often racist police get away with murder. Brutal physical assaults against people of color go unpunished. Rarely are violent police charged for the crimes they commit, and in most cases they don’t even lose their jobs.

Instead, the victims are treated as perpetrators. That’s what happened to Floyd Dent, a 57-year-old African-American Ford worker whose near-murder outside Detroit was seen by millions on video. Their own crimes apparent, cops then concocted evidence to charge Dent with assault, resisting arrest and drug possession.

Now that Black Lives Matter has emerged as a powerful, growing movement that won’t back down, the masses in the streets are scoring a few — far too few — victories.

Floyd Dent won a small but significant victory against systemic racism in Inkster, Mich., possibly one with historic ramifications, when the state took action against the police.

William “Robocop” Melendez, who was seen punching Floyd Dent repeatedly after a traffic stop, was charged by Wayne County Prosecutor Kym Worthy with one count of assault and one of abuse of a prisoner. These two charges combined carry a maximum 15-year sentence. Before the charges were announced, Melendez was fired by the city of Inkster, where the beating took place. After Worthy’s announcement, Highland Park, where he worked part-time, also relieved him of his duties.

Why Melendez is ‘Robocop’

The actions taken against Melendez are long overdue. He earned the nickname Robocop during a long, sordid career on Detroit’s force. That’s where his modus operandi was to brutalize and terrorize and then plant “evidence” on and write phony reports about his victims.

Soon after the charges against Melendez were announced, Inkster Police Chief Vicki Yost resigned. Like 80 percent of Inkster police, Yost is white. Inkster’s population is 75 percent Black. Before she became Inkster’s top cop, Yost too had a racist reputation in Detroit, where she had testified on behalf of her partner after he killed an unarmed man.

The phony drug charges against Dent have now been dropped. A month earlier a judge dropped the other charges after seeing the video. Dent and attorney Greg Rohl are not satisfied with this victory, however, which was only won after hundreds demonstrated and packed the courtroom. Rohl wants the eight white cops who witnessed and participated in the horrific assault to also be charged.

The systemic racism of Inkster and Henry Ford

Inkster’s very existence is rooted in racism. In 1917 the Ford Motor Company began construction of the gargantuan River Rouge complex in Dearborn, Mich., where Ford moved its world headquarters soon thereafter. Dearborn was off-limits to Black people, including the many who found jobs at the Rouge plant.

Henry Ford promoted segregation by financing the growth and development of adjoining Inkster. Black autoworkers were able to purchase affordable homes, enjoy good city services and live close to the plant. Yet Ford’s “benevolence” was illusory; Black workers were paid $4 a day during the Depression, but $3 were deducted to fund Inkster’s expansion.

The Rouge plant itself once employed 100,000 workers, but now there are just over 50,000 hourly Ford workers in the whole country. Plant closings and the elimination of jobs through technology have impoverished Inkster. The state of Michigan seized financial control of the city and dissolved its school district.

Orville Hubbard, Dearborn’s mayor from 1948-78, was known during his tenure as the most segregationist mayor north of the Mason-Dixon line. Everyone knew his slogan, “Keep Dearborn clean,” really meant keep Dearborn segregated. Today the population of Dearborn is still less than 5 percent African American.

However, 40 percent of Dearborn residents are of Middle Eastern descent. The Council on American-Islamic Relations and the anti-Islamophobia group Take on Hate sponsored the April 3 march. A contingent of several dozen Arab youth followed the banner of Take on Hate to show solidarity with Dent.