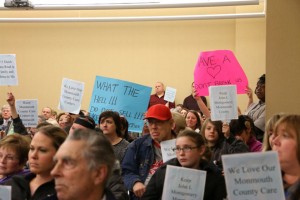 March 24 meeting was packed with defenders of the nursing facilities.

Freehold, N.J. — A meeting called by the Monmouth County Board of Chosen Freeholders was held on March 24 to discuss the decision to privatize two county nursing facilities: the John Montgomery and the Geraldine L. Thompson nursing homes. Freehold is the county seat and is located about 50 miles south of New York City.

The two homes have been run by the county for 60 years. There are 423 workers at the two facilities and there are about 225 residents, some of them severely disabled.

The meeting was packed with 225 people — office workers, nurses and maintenance workers, as well as caregivers and friends of the residents. They all spoke vehemently against the impending privatization, expressing how the quality of the care would suffer and how the move would bolster their employer’s union busting. The nursing home workers have not had a raise in six years and endured givebacks as well.

The Board of Freeholders tried to claim that the nursing facilities were operating at a loss, but participants noted that the operating costs were only 2 percent of a $480 million budget for Monmouth County.

The nursing homes provide a needed service in the community. They should remain publicly run and operated. The workers provide this service and deserve better. A community-labor movement has to be started to fight this privatization move.