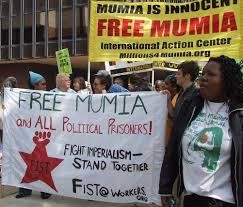 FIST at Philadelphia Mumia action in 2007.

The life of revolutionary, journalist and political prisoner Mumia Abu-Jamal is in danger. We answer: Who is Mumia? Why is his life in danger? How do we free Mumia?

Amongst the 2.5 million people incarcerated in the U.S. right now, one man, Mumia Abu-Jamal, has come to symbolize struggle against mass incarceration, racist police brutality and the struggle for Black liberation. Unfortunately, most young people probably do not know who he is. We need to change this.

Mumia was born in a north Philadelphia housing project in 1954.  As a student at Benjamin Franklin High School, he led a walkout against racism in education and to rename the school after Malcolm X. By the age of 15, he had helped found the Black Panther Party for Self-Defense’s Philadelphia chapter. He immediately became the minister of information, responsible for writing flyers and creating popular media to build the party. The BPP’s militancy, discipline and strong political base in the Black community impacted millions of Black people, and especially Mumia.

The Philadelphia police and the U.S. government viciously attacked the Panthers. Then-FBI Director J. Edgar Hoover said that “the Black Panther Party, without question, represents the greatest threat to internal security of the country,” and promised that the organization would not last past 1969. Yet it did survive for several more years, despite assassinations, spying, and constant disruptions and sabotage by the government.

All of the government repression didn’t stop Mumia from continuing to speak truth to power. Mumia criticized racist Mayor (and former Police Commissioner) Frank Rizzo for his attacks on MOVE, a collective of Black revolutionaries in West Philadelphia. In 1978, Rizzo urged police to attack MOVE, leading to a shootout. Afterwards, the courts unjustly imprisoned nine members of MOVE.

Mumia covered the police’s brutal attack on MOVE from the people’s perspective, causing him to lose his broadcast job. Needing to support his family, Mumia took to driving a cab two nights a week.

On Dec. 9, 1981, Mumia was driving in Center City Philadelphia when he was shot and beaten by police. He was charged with the murder of police Officer Daniel Faulkner, while the real murderer escaped through the subway a block away. Despite a lack of evidence or due process, innocent Mumia was sentenced to death by racist Judge Albert Sabo on July 3, 1982.

For the next thirty years, Mumia sat on death row in torturous solitary confinement. Yet through the power of his own voice, he has continued to serve as “the voice of the voiceless,” publishing seven books and recording “Live from Death Row” reports on Prison Radio. Mumia’s energy and life continue to inspire people fighting racism and police brutality across the world.

The massive movement to free Mumia first saved his life in 1995, as hundreds of thousands poured out in the streets across the world to stop his execution. Due to the ongoing strength of the movement, Mumia’s death sentence was ruled unconstitutional in 2011. Yet he still sits in prison to this day, completely innocent.

Due to the incredible strain and poor conditions facing prisoners, Mumia’s health has been consistently in danger. On March 30, Mumia was hospitalized due to health problems related to untreated diabetes. It is clear that the prison system, which failed to kill Mumia by execution, is now putting him on “slow death row” and attempting to kill him through medical neglect.

The movement to free Mumia has escalated in response to this threat. The only way to guarantee Mumia’s health and wellbeing is to free him from the brutal prison system.

The reason Mumia is still incarcerated is the corruption and racism of the Philadelphia police. These are the same police who shot more than 400 people between 2007 and 2013. As the fourth-largest U.S. police department, with more than 7,000 agents, they are a racist army occupying the U.S.’s poorest big city.

The fight to free Mumia is the fight against racism and oppression in Philadelphia and beyond. Mumia is a beacon of resistance to racism, capitalism and the U.S. military machine.

Today we must continue this struggle and popularize Mumia. The only way to free Mumia is by building a movement of millions of people in the streets.

Young people have the most reason to fight. The capitalist system offers us no future. “Occupy Wall Street” and “Black Lives Matter” have proved that young people are feeling rebellious and ready to fight back.

“Fight Imperialism, Stand Together” (FIST) is a youth organization that has been supporting the fight for Mumia since we were founded in 2004. We will continue to fight alongside all of the other tremendous activists in this movement and its great leaders.

For all of those who stand for freedom, justice and liberation, Mumia Abu-Jamal is our revolutionary hero. Let’s teach more young people about Mumia and let’s mobilize them to take action.

On April 10, there will be an international day of action demanding #MumiaMustLive: No execution by medical neglect! More actions in cities across the country will be continuing to demand the freedom and safety of Mumia and for all political prisoners.

Organizers on the ground are also asking the following:

Call Philadelphia Department of Corrections Superintendent Wetzel at 717-728-4109 and Gov. Wolf at 717-787-2500 to demand that the DOC meet with supporters, friends and family of Mumia, and to demand immediate health care for Mumia along with a healthy diet to counter his diabetes. Also demand that they free Mumia!