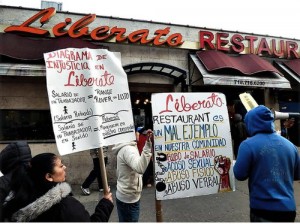 Since April 2014, Liberato restaurant workers, mainly immigrants from Latin America, have protested wage theft, retaliation and sexual harassment that their employer engaged in. They have been assisted by the Laundry Workers Center.

The Liberato restaurant is located in the Bronx, N.Y.

The picketing and other protests were so effective that Liberato filed a Racketeer Influenced and Corrupt Organizations Act complaint against the LWC, charging it with waging class warfare against a local business, using slander and harassment.

The LWC filed a National Labor Relations Board complaint against Liberato. The NLRB recently decided to hear the complaint.

At a March 12 hearing on the RICO charge, a worker told owner Antonio Liberato, “We are suffering because we’re not being paid the minimum wage, and we are suffering harassment. That is what I know, and it’s the truth.” (LWC Facebook page)

The workers and the LWC have another response to the RICO charges. They restarted picketing and meeting in front of the restaurant March 16.