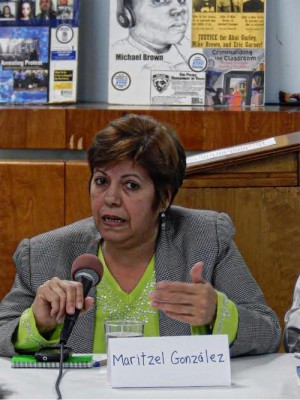 Annually each March during Women’s History Month, the Federation of Cuban Women sends a delegation to New York City to attend the United Nations Commission on the Rights of Women. A forum was held March 14 honoring the federation hosted by the Interreligious Foundation for Community Organization at Fordham University Law School.

The federation was established in 1960 as the national collective to drive, secure and protect the rights of women in the new revolutionary Cuban society. The federation continues to fight for women’s liberation, social justice and equality for women, including ending violence against women. In 1965, Cuba declared that abortion is a woman’s right. The rights of women are protected by Cuba’s constitution and laws. In 1997, the federation acquired nongovernmental organization status at the U.N.

The federation played a central role in Cuba’s effort to eliminate illiteracy. It has been involved in developing Cuba’s outstanding medical care infrastructure and voluntary health missions worldwide. The women were also instrumental in mobilizing support for the Cuban 5 political prisoners held in the U.S.

Cuba’s revolutionary ideals have resulted in women being involved in economic and cultural decision making. Equal rights have resulted in increased employment opportunities in all occupations and professions. Women are well represented in politics and government in the Parliament. The Cuban Communist Party decides the norms of the economic and political revolution, with women participating fully in the party.

At the March 14 forum the Cuban women discussed the challenges they face and their accomplishments. In responding to questions regarding President Obama’s recent announcement of normalizing relations with Cuba, the Cubans commented that the U.S. still has the same objectives and intentions as in the past, which are to destroy the Cuban revolution; but now by different tactics, they stated. The U.S. sees Cuba as its backyard and has always interfered in Cuba’s affairs.

Even now with state to state U.S.-Cuba discussions underway, Cuba is subject to automatic sanctions from the U.S. list of countries unilaterally deemed to support “terrorism.” The more than 50 year commercial, economic, financial and commercial blockade is still in place. The women pointed out that President Obama doesn’t need congressional approval to end many aspects of the blockade.

Regarding U.S. sanctions against Venezuela, the women replied that Cuba takes a protective stance toward President Maduro and the Bolivarian Revolution. Since 1959, there has been unity with Latin America, the Caribbean and Africa.

The Federation of Cuban Women state they support the U.S. re-establishing diplomatic relations with Cuba, but only on an equal basis with mutual respect, not subject to conditions set by the U.S.

Cuba will maintain its principles, ideals and autonomy. The revolution is not negotiable, the women emphasized. They are committed to continue working toward a world of peace, justice and equality.