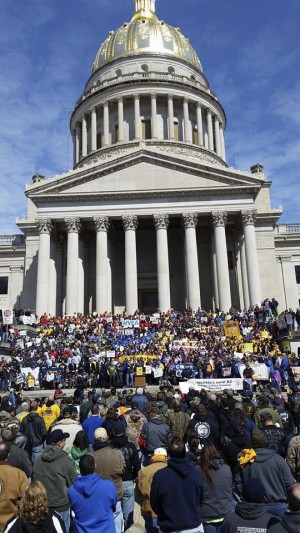 Charleston, W.Va. — An estimated 7,000 people showed up at the Capitol building in Charleston, W.Va., on March 7 to picket the state Legislature’s consideration of a “right-to-work” (for less!) bill, as well as a number of other reactionary laws that have been proposed in this session.

Called the “Mountaineer Workers Rising Rally,” every union in the state was well represented, including the United Electrical Workers Local 170, the United Food and Commercial Workers, the Service Employees District 1199 OH/WV/KY, the American Federation of Government Employees, the Teamsters and others. Every union hoisted its own banner and wore a particular color to express solidarity and distinguish itself in a united front fashion. There were also trade unionists from surrounding states in attendance.

West Virginia is one more state that has been caught up in the right-wing wave of anti-union legislation, similar to the struggles in Wisconsin and Indiana. Other legislative initiatives that were protested are the introduction of charter schools, the elimination of the prevailing wage, the so-called “Teach for ‘America’” program, the eradication of payroll-dues deduction, the attack on existing environmental regulations and the weakening of workplace safety rules, particularly in coal mining. Two days after the rally, a coal miner was killed as a result of a roof top collapse in Cameron, W.Va.

In addition to the anti-union/RTW legislative proposals, people took issue with other appalling pieces of legislation. In West Virginia, where nearly one-third of the state went without normal water service last winter as a result of a chemical spill, the arch-reactionary and corporate-funded legislators gutted a bill by nearly 75 percent that would have regulated above ground, toxic chemical tanks. At another low point in regressive legislative action, a 20-week abortion ban was passed, vetoed by the governor, and then the veto was overwhelmingly overridden by both the House and the Senate.

At the beginning of the session, a modern-day McCarthyite type bill was introduced that would prohibit K-12 teachers from mentioning socialism, communism, labor history, the United Nations or the Great Depression. If found “guilty,” according to this despicable bill, the teacher would be charged with a misdemeanor, would lose her or his teaching license for a minimum of one year and could possibly face jail time.

A theme that was repeated throughout the rally event was “Stop the War on Workers.” And it truly is a global class war happening from Wisconsin to Ferguson, Mo., to Occupied Palestine. Working and oppressed people have a world to win through struggle.