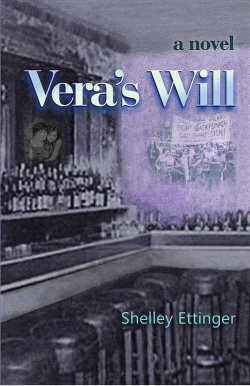 The main challenge in reviewing the wonderful new novel, “Vera’s Will” (Hamilton Stone Editions, 2015), by Shelley Ettinger is to not issue spoiler alerts before every paragraph. This is difficult because “Vera’s Will” is not only well-written and often poetic, but is also a great page-turner.

Readers will want to know what happens, not only to Randy Steiner, the present-day narrator and Vera Resnick Steiner, Randy’s grandmother, but to all the others populating the three generations of immigrant and U.S.-born characters.

Both Vera and Randy are Jewish, and that becomes an integral part of character development. Ettinger shows great dexterity in weaving the experiences and political activism of early 20th century immigrants into the fabric of the story.

Vera and Randy are also lesbians. How this plays out in their lives is likewise told in the context of the political struggles of the last century. And this is what ultimately gives “Vera’s Will” its optimistic tone.

Yes, there are setbacks and personal heartache, and that includes love. As Vera struggles with hateful anti-lesbian bigotry, she confides to her African-American sister-in-law Dorothy — with whom she has maintained a close friendship, writing regularly for years — that Vera is unable to change this ­“affliction.”

Ettinger describes, in Vera’s voice, the correspondence that followed yet another blow from Vera’s ignorant family: “The only thing I can think is that I still want what I can never have. I wish I could accept that I just don’t fit, stop wishing for, well you know, Dee.”

The character, Dorothy, responds: “The reason you can’t is simple. You’re human. You want love. If that went away, if you gave up, you’d hardly be alive at all.” That takes place in 1954.

The novel’s optimism comes from showing, through the vehicle of fiction, the victories of political struggle and how they impact individuals. This is Randy’s coming-out journey, a journey that began before she was born. Life is lived in the past and present — and in preparing for the future because “a better life is in birth.”

To organize and fight for a world without bigotry, violence and exploitation, to struggle for socialism, is how to be fully human and a path to living a good life.

Thank you, Shelley Ettinger, for this great novel that will hopefully reach many hands. It will certainly touch many hearts.

“Vera’s Will” received a starred review from the Library Journal at tinyurl.com/pmklexg. More information about the book is available at shelleyettinger.com; order from online booksellers.

Susan Schnur’s roots are Jewish, planted in the same part of Eastern Europe as Vera’s family.